Yarning Circle – News From Around The Diocese | ‘Because of her, we can!’ NAIDOC Profile: KARAN TAYLOR

Karan’s achievements over two decades working in Catholic Education were recently recognised when she was awarded a prestigious NATSICC (National Aboriginal and Torres Strait Islander Catholic Council) Service to Community Award - a national recognition of her work with Australia’s first peoples and their relationship with the Catholic Church in Australia.

With this year’s NAIDOC theme, ‘Because of her, we can!’, there’s no more fitting time to celebrate Karan’s contribution to our community as a positive role model and woman of integrity, commitment and strength. We spoke to Karan about her life and work in a four-part audio interview below…

RECEIVING NATIONAL RECOGNITION FOR HER WORK

Listen to Karan’s reaction to receiving the NATSICC Service to Community Award 2018, including a contribution from CEDoW’s Head of Strategic Planning & Policy, Mark Raue.

Both a proud Catholic and a proud Gadigal woman, Karan began in Catholic Education in 1997 as a School Support Officer, supporting a small number of Aboriginal students at Stella Maris, Shellharbour. She was quickly targeted as a future system leader, subsequently gaining her Bachelor of Education from the Australian Catholic University and moving into the Catholic Education Office to take charge of  Aboriginal and Torres Strait Islander Education.

This NATSICC award is testament to Karan’s outstanding work in that time - both within and beyond our Diocese - in the service of Catholic school communities, the broader Church and, significantly, Aboriginal and Torres Strait Islander children, families and communities.

CEDoW staff had the opportunity to celebrate Karan’s achievements at a recent NAIDOC smoking ceremony and presentation at the Catholic Education Office.
See our full photo gallery here. 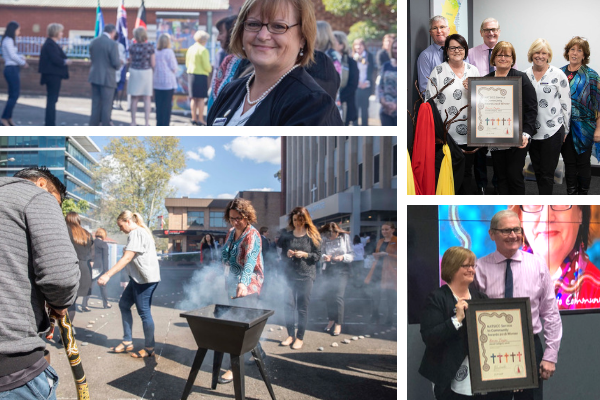 Karan has been instrumental in leading Catholic Aboriginality in our Diocese and connecting Catholic Education community. She has actively helped schools and parishes make contact with local Aboriginal community members to appropriately recognise Aboriginal culture and history - be it through liturgies, artworks, or celebrating occasions such as NAIDOC Week, Sorry Day, the Appin Massacre Memorial and Aboriginal and Torres Strait Islander Sunday.

Karan has had a meaningful influence on the entire school system through integrating and promoting Aboriginal Catholic life. Her commitment has made Aboriginal spirituality, life and culture integral to the workings of CEDoW - including through the significant Aboriginal and Torres Strait Islander Education Policy recently launched in our Diocese.

Listen to Karan on her journey in Catholic Education.

A strong advocate for empowering local Aboriginal and Torres Strait Islander families through education, Karan has always been driven by the desire to give as many Aboriginal students as possible the opportunity of a Catholic Education - and she continues to deliver on this mission. Thousands of Aboriginal kids now have the benefit of Catholic schooling because of her.

Her leadership, role modelling, community engagement, astute networking and gentle challenging of the comfortable status quo have been the single most influential factor in this increase - something also recognised by Director of Schools, Mr Peter Turner.

A key part of CEDoW’s enrolment success has stemmed from the Aboriginal Education Assistant (AEA) program that Karan has implemented and now oversees across the Diocese. Listen to Karan explain her passion for the AEA program and how it benefits our Aboriginal and Torres Strait Islander communities.

She humbly downplays her influence, but CEDoW Head of Strategic Planning and Policy, Mark Raue, says he has seen first-hand how beautifully Karan connects Catholic life and culture with her Aboriginality.

“Karan is highly respected by Aboriginal and non-Aboriginal people alike. Her achievements in education and faith can be directly attributed to her personal faith and beautiful human qualities - her generosity, gentleness, respect for the wisdom of Elders, compassion for those in need, courage of her convictions and a zeal for the Gospel” - Mark Raue.

CEDoW Special Projects Education Officer, Beth Riolo, said it is a joy to know Karan and a privilege to work with her in Aboriginal and Torres Strait Islander Education.

“I have been fortunate in life to have some amazing women enter my sphere as mentors, teachers and guides, and Karan Taylor is most certainly one of them. Her encouragement and invitation for the two of us to work as Aboriginal and non-Aboriginal women walking together is a tangible example of what reconciliation in action can look like" - Beth Riolo.

“Karan has taught us all so much. Her energy and commitment to our schools and the wider community is outstanding, which makes her NATSICC award so well-deserved,” Anne Dal Santo.

THIS YEAR’S NAIDOC THEME, ‘BECAUSE OF HER, WE CAN!’

Listen to Karan explain the importance of this year’s NAIDOC theme, ‘Because of her, we can!’ and pay tribute to all the strong and inspirational Aboriginal and Torres Strait Islander women in her life.

“I definitely haven’t done this on my own. Catholic Education Diocese of Wollongong has supported me all the way, I’ve been very lucky,” she said. 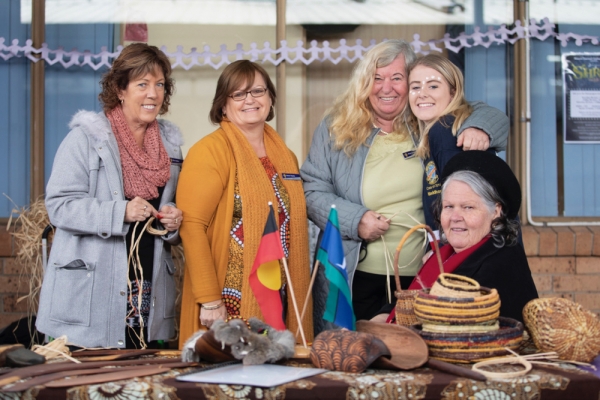 Read more about CEDoW’s NAIDOC celebrations here - including a message from the Director and a video from students across the Diocese who pay tribute to the incredible Aboriginal and Torres Strait Islander women in our CEDoW community, inspired by this year's NAIDOC theme: Because of her, we can!