From the art room to the playground, the school grounds to the library, there has been plenty happening to mark NAIDOC Week 2019 as CEDoW schools have come together to celebrate the invaluable contributions Aboriginal and Torres Strait Islander peoples have made - and continue to make - to our communities, our families, our rich history and to our nation.

With over 700 Aboriginal and Torres Strait Islander students and their families enrolled in our systemic Catholic schools across the diocese, CEDoW communities were enthusiastic participants in the annual NAIDOC (National Aboriginal and Islanders Day Observance Committee) Week.

The yearly event invites all Australians to walk with Aboriginal and Torres Strait Islander peoples in a movement of the nation. This year’s theme was ‘Voice, Treaty, Truth - Let’s Work Together for a Shared Future’. It signifies three key elements of the reforms set out in the 2017 Uluru Statement from the Heart, that represents the unified position of First Nations Australians.

“For generations, Aboriginal and Torres Strait Islander peoples have looked for significant and lasting change,” said National NAIDOC Co-Chair, Patricia Thompson. “We need our fellow Australians to join us on this journey - to finish the unfinished business of this country. The Uluru Statement from the Heart is built on generations of consultation and discussions among Indigenous peoples - we need to be the architects of our lives and futures.” 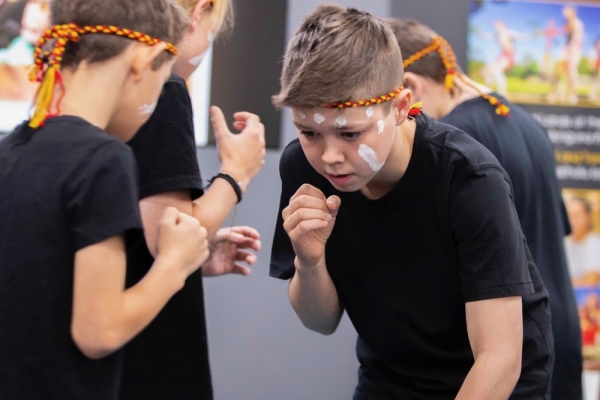 Over decades, Indigenous Australians have sought recognition of their unique place in Australian history and society. This year, the United Nations is also commemorating the International Year of Indigenous Languages. “It’s time for our knowledge to be heard through our voice - an Indigenous voice of this country that is over 65,000 years old,” said National NAIDOC Co-Chair, John Paul Janke.

“They are the first words spoken on this continent. Languages that passed down lore, culture and knowledge for over millennia. They are precious to our nation and need to be celebrated but it’s our voice that needs to be listened to.”

The 2019 theme acknowledges that Aboriginal and Torres Strait Islander peoples are still campaigning for an enhanced role in decision-making in Australia’s democracy; our various First Nations’ desires for lasting and effective agreements such as treaties, which cannot be achieved unless we have a shared, truthful understanding. 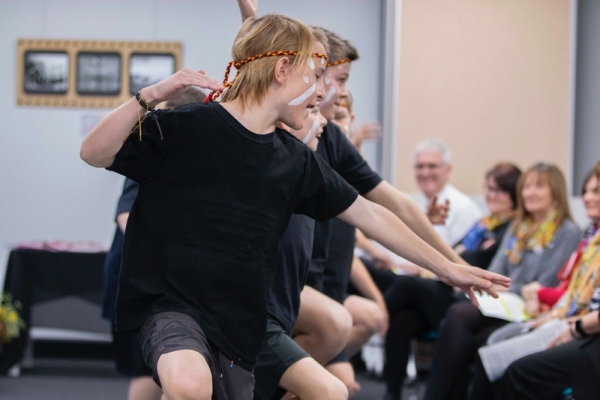 Staff of the Catholic Education Office kicked off NAIDOC Week early with a gathering on the first day of July. Students from St John’s Catholic Parish Primary School, Dapto were invited to share their traditional dancing (and were also invited to perform Aboriginal dance at the Ribbonwood Community Centre). For their efforts, each student received a certificate of thanks from Director of Schools, Peter Turner who also publicly thanked Principal, Andrew Heffernan and staff members, Uncle Mark Mongta, Aunty Josephine Ball and Melissa McEntee for their guidance. 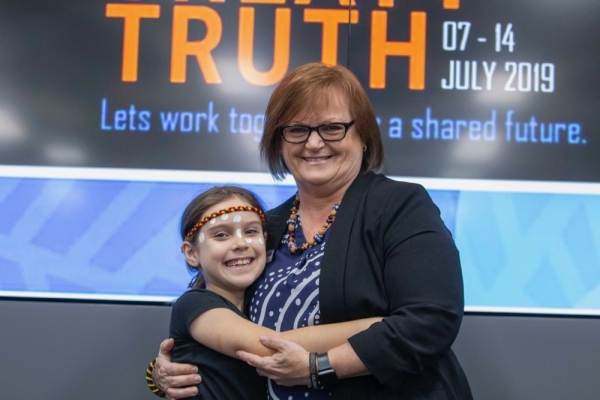 “We still have a way to go in Closing the Gap and can always do better. But it is important we listen with both ears to our Aboriginal family’s voices of what their needs are, and to look at how we can continue to support them to the best of our ability to improve their children's educational outcomes and wellbeing.”

Coming Together for NAIDOC Celebrations

Across the diocese, our communities have had busy schedules throughout July and August to commemorate NAIDOC Week - on the lands of the Dharawal, Tharawal, Yuin and Gundungurra nations - celebrating in a variety of ways. Read below a summary about how some of our CEDoW communities got involved in NAIDOC Week 2019, and see the photo gallery here. There’s a lot to celebrate!

At John Therry, which has the highest enrolment of Aboriginal students in the diocese, a NAIDOC assembly included Aboriginal dancing performed by students, and the presentation of a very special award - the National Aboriginal and Torres Strait Islander Catholic Council (NATSICC) 2019 Service to Community Award. Presented by the Director of Schools, Peter Turner (on behalf of the Australian Catholic Bishops), it was awarded to “living treasure” Uncle Ivan Wellington. “Uncle Ivan draws people together, listens keenly, and tries to gently educate non-Aboriginal people about culture and history, but always with warmth and humour,” said Mr Turner. “He is fiercely proud of his culture and heritage, and proud of the Aboriginal students and young people who are following in his footsteps.” 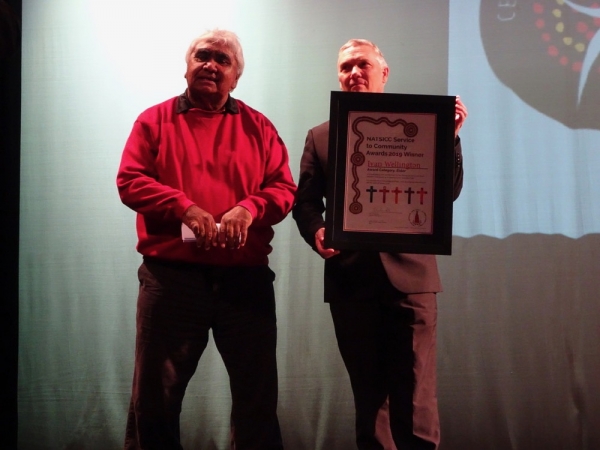 The St Joseph’s school commemorations included a liturgy led by Aboriginal students, Miah and Tionne. Uncle Mark Mongta led a didgeridoo performance by a talented group of students. In addition, Aboriginal and non-Aboriginal students performed a piece of contemporary dance, expressing the meaning of NAIDOC through movements they choreographed with the assistance of ex-student and proud Worimi, Bundjalung woman, Toumanda Fohrman and Aunty Josephine Ball. The school choir also performed the National Anthem in language. Principal, Amanda Wilson, said “Our student and teacher contributions culminated in a very meaningful, informative and reflective liturgy, where our knowledge and understanding of the challenges faced by the nation’s first peoples in the past and today have grown exponentially through our wonderful assembly.” 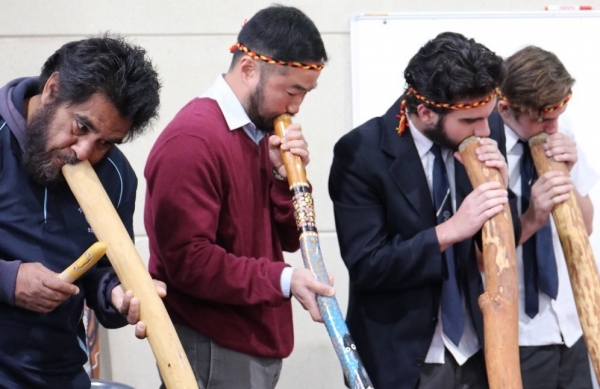 In a significant moment for St Justin’s, as part of their NAIDOC celebrations, the school launched their new six-house colour system based on the Dharawal seasons of the year. Using the beautifully crafted research by Aunty Fran Bodkin in her book, D’harawal Climate & Natural Resources, the school renamed and expanded its four-house colour system to now include six new houses representative of each season (read our full report here). "Our new Dharawal houses marks a significant moment in our school's identity, as we expand our connection beyond that of the parish, to include the land on which we belong," said Principal, Kevin Devine. “Students and staff have learned the names of the seasons in Dharawal language and the deep connections the seasons have alongside the flora and fauna that live and grow on Dharawal country.” 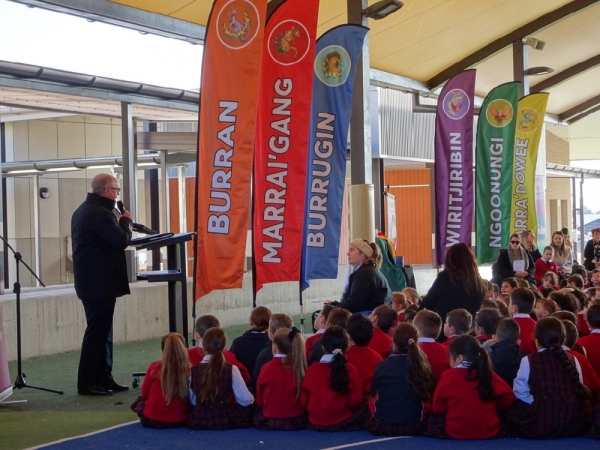 The St Pius X playground was alive with red and yellow, as their students enjoyed wearing mufti clothes to celebrate NAIDOC. The school also held a liturgy, whilst each class participated in Aboriginal and Torres Strait Islander activities such as dot painting and learnt about Dreamtime stories. Year 6 student, Thomas said the students in Stage 3 designed a NAIDOC Week poster. “We researched the significance of NAIDOC Week and the history and culture of Indigenous Australians,” he said. “The NAIDOC theme this year recognises that all Aboriginal and Torres Strait Islander people’s voices' need to be heard and the true story of colonisation told.” 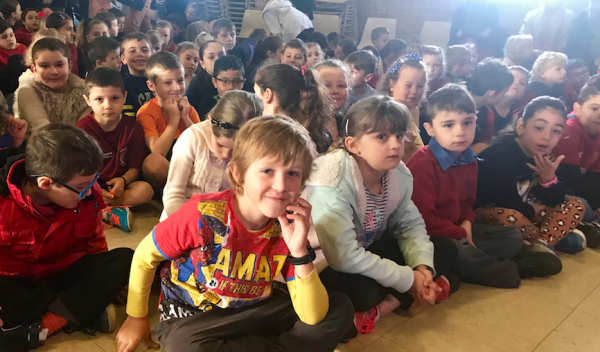 An assembly attended by students and members of the wider community commenced with a smoking ceremony and included dance and didgeridoo performances by St John’s students. During the event, local stories were shared – including the story of Ararrawa, a local Aboriginal man – and the school held a special gathering where Aunty Grace acknowledged the students and staff of St John's for the focus given to the education of Aboriginal and Torres Strait Islander students. “NAIDOC is about celebrating and expressing your Aboriginal self by connecting to land and spirit,” student, Adam said. “Being proud of your culture by dancing, singing, speaking or just embracing the event.” 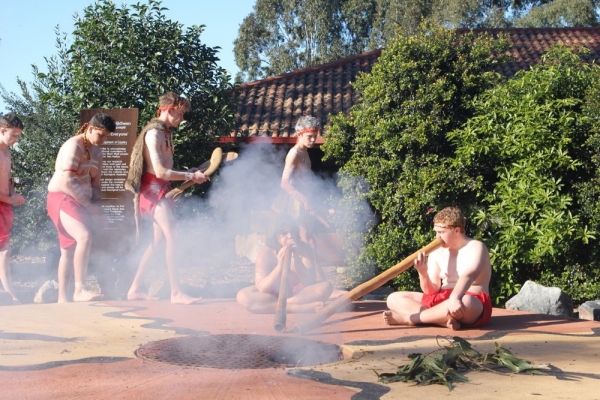 Our Lady Help of Christians began their NAIDOC celebrations with an Acknowledgment of Country at their school’s Flag Raising Ceremony, followed by a commemorative prayer. In an artistic gesture, students were invited to dress in three symbolic colours - red, yellow and black - to form their own [human] Aboriginal flag. On the day, parents and carers were invited to attend grade visits with Aboriginal Community Engagement Officer, Aunty Sharynne Freeman who shared Dreamtime stories and Aboriginal culture, while other students participated in fun lunchtime activities too. 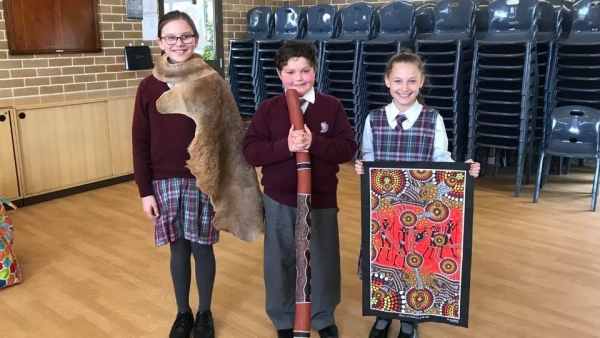 Mary Immaculate welcomed visiting Elders, Aunties and Uncles from the Dharawal community for a special celebration liturgy. The assembly was led by Mary Immaculate students who read the Liturgy of the Word and Acknowledgement of Country as well as leading a group of younger students in a traditional welcoming dance. “I felt it was a great way to share my culture," said Year 3 student, Matilda." I felt excited to be part of the NAIDOC liturgy as I got to guide our Principal, Mr Spencer onto the stage by playing clap sticks." Thanks were offered to staff members, Aunty Sharynne Freeman, the school’s Aboriginal Community Engagement Officer, Darryn Warren, Danielle Grados, and Andrew Oldfield for their expertise. 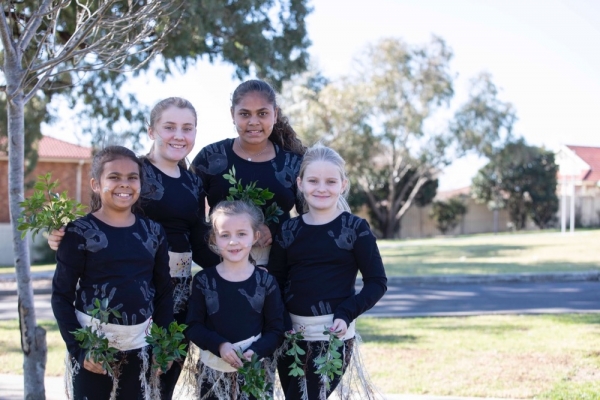 In celebration of NAIDOC, the students at St Michael’s loved Aboriginal storyteller, Larry Brandy’s ‘Indigenous Infusion’ presentation on Wiradjuri culture, movement, history and artefacts, with a focus on the significance of family, the environment and everyday life. The students also enjoyed a liturgy, followed by various activities including storytelling, dot painting and traditional outdoor games such as ‘gorri’, ‘kai’, ‘koolchee’ and ‘kolap’.

Students from Good Samaritan spent the lead up to NAIDOC Week celebrating the history, culture and achievements of Aboriginal and Torres Strait Islander peoples. These additions to their usual syllabus included rich and insightful discussions, history lessons and even some rap in native tongue! During the week, Kindergarten to Year 6 students also contributed colourful artworks for a NAIDOC art exhibition. The school’s drama classes also created amazing productions of Dreamtime stories. 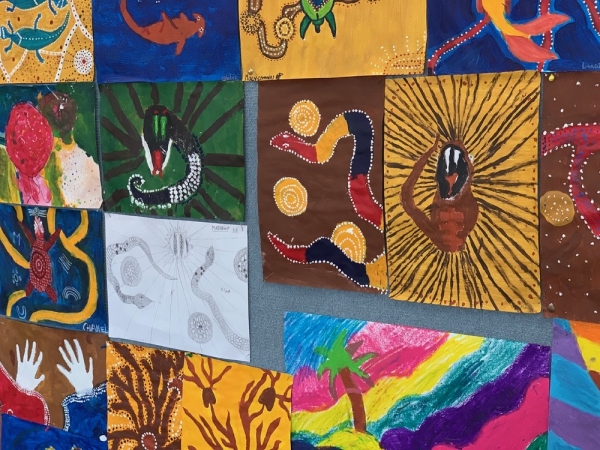 It was singing and dancing to celebrate NAIDOC at St Michael’s. Their whole school community were invited to join in for a special assembly, including Federal Member for Gilmore, Fiona Phillips MP. It was a great event with lots of performances by students, and even a special performance by Principal, Chris Paton and teacher, Natalie Rojas, singing the old classic ‘Solid Rock’, a song that deals with issues of land rights for Indigenous Australians. Ms Phillips shared, “What an inspiring NAIDOC assembly, with so much beautiful Indigenous dancing, music and readings. A real credit to students, local Elders, teachers, and everyone involved - our future is in great hands.” 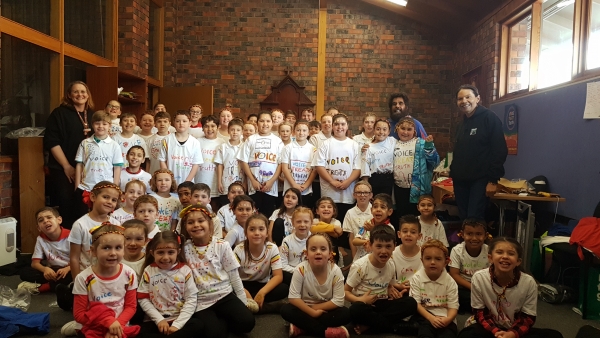 In recognition of NAIDOC Week, St Thomas More held a liturgy, where they invited parents, grandparents and carers and local Elders to attend. The Welcome to Country was given in Dharawal and English by Aunty Sharynne Freeman. Aunty Sharynne then shared Dreamtime stories with each grade, where students were engaged and learnt about Aboriginal culture. “The children were so excited to see things and hear things that were different to a regular school day,” Aunty Sharynne said. “They had so many questions to ask and also their own stories to tell. It was so great to see their joy.” 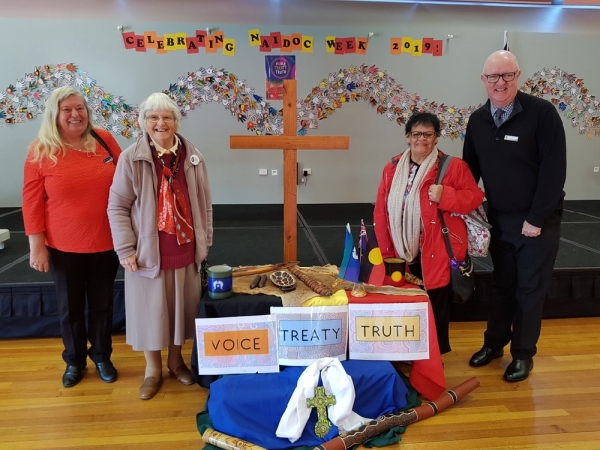 Holy Family gathered for a liturgy to celebrate NAIDOC. The school was fortunate to have local Aboriginal man, Wayne Riley play the didgeridoo for their community. Wirijtiribin Dance Group members performed traditional dances at the liturgy, including Destiny, a local Aboriginal girl and her younger sister, together with Ruby Prasad who is in Year 2 at Holy Family. Principal, Paul Moroney said, “It was a lovely celebration and we thank everyone involved and hope everyone enjoyed the liturgy.” 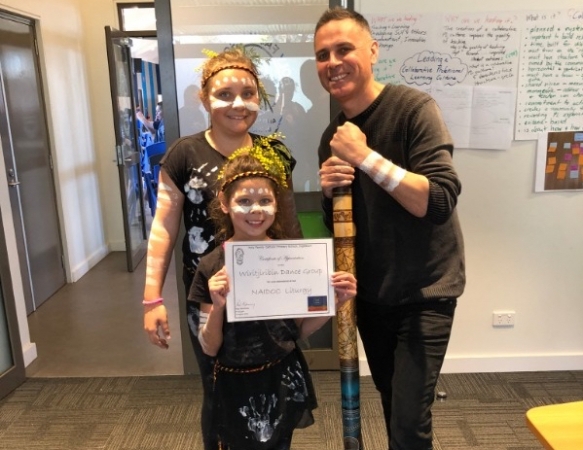 Have a look at our collection of 2019 NAIDOC photos in the Photo Gallery below.