Congratulations to our Aboriginal Education Assistant, Rheanna Lotter! The Indigenous artist and Southern Highlands resident has designed the Indigenous print which will feature on the 2020 Australian Paralympic Team uniform.

When Rheanna, a Yuin nation woman, first received the call to design the Paralympic print she was in disbelief.

"I was pretty unknown, designing the [Greater Western Sydney] giants Indigenous jumper in 2017 was my biggest achievement at the time," she said.

"I didn't believe it. It seemed promising but it was in disbelief. I was like 'no way'. I was happy but I was cautious, but then a month later it really kicked in to gear."

The artwork titled 'Journey' represents each of the athletes participating the in the Paralympics. The eight circles which feature in the painting represent the states and territories in Australia as well as the diverse background of the athlete, while the tracks represent the journey and the connection between people.

The boomerangs which are scattered throughout the painting represent the challenges and adversity of the Paralympians and the 'U' symbol surrounding the circle represents the athletes from each state.

"We had plenty of meetings and I felt like I was delivering what they wanted."

However Rheanna states that the symbols she uses can have different meanings to other Indigenous artists.

Rheanna first started painting from a young age and learnt from her mum Wendy.

Rheanna admits that as a child she would only paint occasionally but it wasn't until she moved to Sydney that she started to paint on a regular basis, taking her pieces to the markets to be sold.

"When I moved to Sydney I didn't know the community and I felt that I had lost a little bit of who I was," she said.

"Painting helped me connect to my culture. I've been [painting] for six years and jobs are coming to me now. Hard work pays off" — Rheanna Lotter

"[Aboriginal culture] is everything I am. I grew up immersed in it the culture and hearing dream time stories and come from a massive family filled with culture and love. I couldn't be prouder."

Rheanna owns her business Ngandabaa, (pronounced yun-da-baa), where she creates and sells her art work. The name Ngandabaa comes from her grandfather's totem and means red belly black snake.

Chef de Mission of the 2020 Australian Paralympic Team Kate McLoughlin said 2020 uniform would bring added significance and meaning. "Our athletes were honoured to wear something that celebrated Indigenous Australia's rich history 2016. We're extremely proud that our [athletes] will celebrate our nation's Aboriginal and Torres Strait cultural heritage," she said.

Visit Rheanna's website at https://www.ngandabaa.shop/ and follow her on Facebook and Instagram pages, Ngandabaa. She has worked with the AFL, Reach Out Foundation and the Fred Hollows Foundation and has a number of future projects in the pipeline. 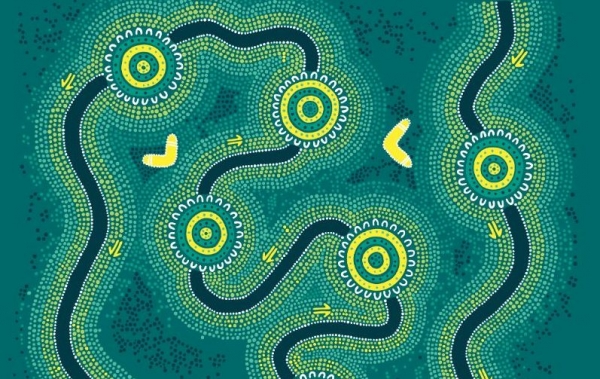