A significant moment in the history of St Justin’s Oran Park – the school community has launched its new six-house colour system based on the Dharawal seasons of the year.

St Justin’s fittingly chose its NAIDOC celebrations this year to present the new banners and officially begin its six-house system – a special whole-school liturgy in the presence of excited students, parents and the wider school community, as well as members of the Catholic Education Office and local community.

Using the beautifully crafted research by Aunty Fran Bodkin in her book, D’harawal Climate & Natural Resources, the school has renamed and expanded its four-house colour system to now include six new houses representative of each season:

In consultation with Aunty Fran and her son, Gawaian Bodkin-Andrews, the students and staff have learned the names of the seasons in Dharawal language and the deep connections the seasons have alongside the flora and fauna that live and grow on Dharawal country – especially fitting in this International Year of Indigenous Languages. 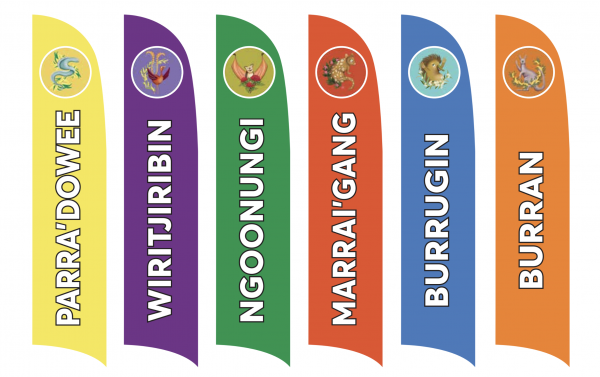 Principal, Kevin Devine, said the colourful event connected the story of the Dharawal nation to that of St Justin's.

“The new house colours mark a significant moment in the identity of the school as we expand our connection beyond that of the parish, to include the land on which we belong,” he said.

“It is hoped that the symbols and stories associated with each of these new house colours will assist our students to better understand and appreciate the incredibly rich and sophisticated culture that has thrived in our local region from long before it was settled by Europeans” — Kevin Devine, principal, St Justin’s Oran Park

“NAIDOC Week is always a wonderful celebration for any community, but this year in particular, with the launch of our new house colours, we have the amazing capacity to shape the hearts and minds of the students of this school – now and for generations to come.

“Thanks in large part to the great work of Aunty Fran Bodkin, we now have a unique opportunity to learn about and appreciate the awesome culture that we find ourselves a part of.” 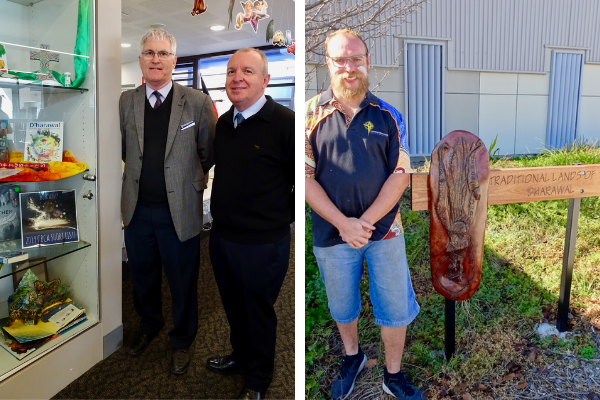 “This has been a wonderful journey of learning for the whole school community, who have consulted with a number of local Aboriginal people about local knowledge and connections to country – including Aunty Fran, who is one of the many wonderful knowledge holders of Aboriginal ways of learning and knowing. She has spent many years sharing her knowledge that was passed down to her from her mum and great nan.”

“Traditional knowledge and understanding of country is the deep connection that Australia’s traditional custodians have always known, and it is important as Australians that we all learn from this sacred knowledge.”

“It is great to see St Justin’s striving to incorporate the traditional custodians within the culture of their school. This learning journey will continue across the school as they acknowledge and celebrate the Dharawal seasons throughout the school year” — Karan Taylor, CEDoW Aboriginal and Torres Strait Islander Education Officer 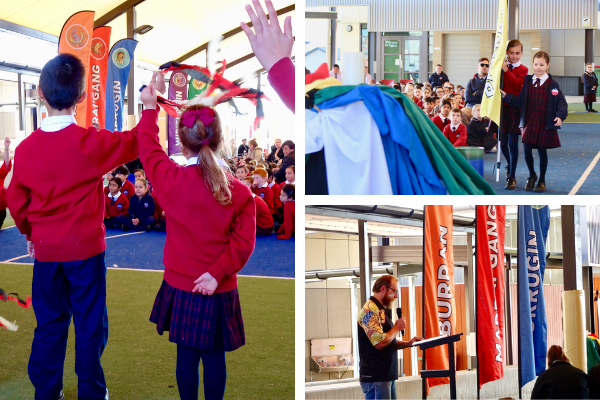 Aunty Fran’s son, Gawaian, who attended the celebration on behalf of his mother, said he was “deeply touched” by the way the school had sought to use his mother’s work to help teach the students about the rich culture of the Dharawal nation.

He said the approach taken by St Justin’s was “one of the best [he’s] witnessed”.

“To see the pride in all the students throughout the morning was an absolute pleasure and highlight. Speaking with parents afterwards, they were also very enthusiastic about the new houses and the opportunity for the children to be able to embrace the local traditional knowledge and understanding of Country” — Kim Hobbs, CEDoW Aboriginal & Torres Strait Islander Education Special Project Officer 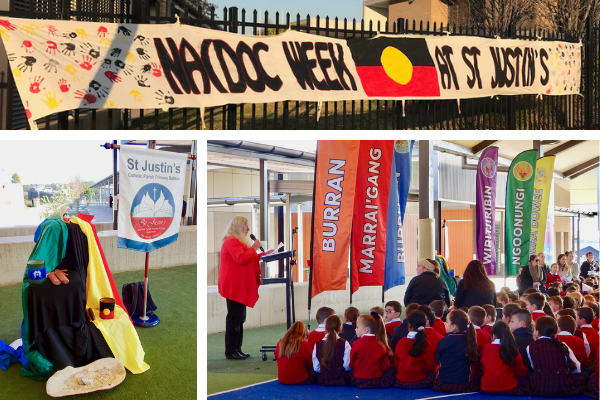 Along with the launch of the new house banners and names, St Justin’s teachers and staff – led by the school’s Aboriginal and Torres Strait Islander Education contact, Samantha Vergara, and CEDoW Aboriginal Education Assistant, Andrew Oldfield – arranged a number of additional experiences for the students to help celebrate NAIDOC Week and further deepen their understanding of Aboriginal and Torres Strait Islander history and culture.

Students then broke off into grades – Year 6 decorated boomerangs with traditional symbols, discussing the importance of artistic designs and symbols to convey stories and messages – something they discovered is incredibly important in Aboriginal and Torres Strait Islander culture.

Congratulations St Justin’s! We look forward to seeing the ongoing recognition and celebration of Dharawal seasons and culture through your new house system.