Director's News | "The future has a name, and that name is HOPE": hundreds of CEDoW staff gather to celebrate Diocesan Education Mass

“Victor Hugo once said, ‘The future has many names. For the weak of will it means impossible and for the fearful it means the unknown.’ But Pope Francis has a different view, and may it find a place in each of your schools throughout this new school year: the future, he says, does have a name – and that name is HOPE,” Director of Schools, Peter Turner has told over 800 CEDoW staff gathered at this year’s Diocesan Education Mass.

In the midst of Catholic Schools Week, the Mass was a special and moving celebration for our CEDoW education community. It saw Catholic educators from all corners of our growing Diocese come together at St John Vianney Co-Cathedral in Fairy Meadow in a strong statement of unity and spirit, to celebrate not just who we are, but what we believe in.

“The 26,000 young people who walk through the gates of our Diocesan systemic and congregational schools for nearly 200 days in 2019 - they are the reason why this Church is filled to capacity tonight,” Mr Turner said.

“Consider for a moment the stories behind the faces of those 26,000 young people: some come ready to change the world; some come anxious and uncertain; some come well-supported from home; some come lost and forgotten; some come well-versed in their faith; some come void of an experience of a loving God. All, however, have one thing in common. They - this day, this week, this year - come to you.”

“In 2014, Pope Francis called education an act of love. He went on to say, ‘The educator in a Catholic school must be, first and foremost, competent and qualified but, at the same time, someone who is rich in humanity, capable of promoting human and spiritual growth’,” Mr Turner shared.

Mr Turner concluded his address with the official launch of CEDoW’s new Lighting the Way Vision and Strategic Direction 2019-2022 document, and its symbolic handing over to Bishop Brian.

Representing all members of Catholic Education Diocese of Wollongong – and as a nod to the present and future of the Diocese that this document intends to serve – CEDoW Head of Strategic Planning & Policy, Mark Raue; new principal, Vicky Davidson from St Francis of Assisi, Warrawong; teacher, Sam Mattas from St Patrick's, Port Kembla; new parents, Vesna and Borch Jovanovksi with their child and new Kindergarten student, Jake Jovanovski, together presented the new plan to the Bishop.

“This plan outlines our responsibilities in faith and learning, and how we intend to deliver on these intentions. The work is founded on the myriad of values espoused by Jesus in the Gospels, but with a focus on four: integrity, justice, compassion, and that chosen as our theme for 2019 – hope,” Mr Turner said. 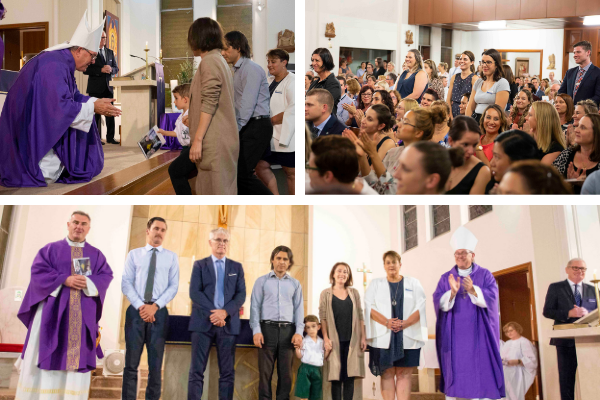 A further highlight of the night was the notable Welcome to Country voiced by CEDoW Aboriginal Education Assistant, Josephine Ball and CEDoW Education Officer, Beth Riolo, and brought to life in the aisles of the Church by student Aboriginal dancers from John Therry, Rosemeadow and didgeridoo players from St John the Evangelist, Nowra.

The Mass was a particularly memorable occasion for the Diocese’s three new principals – Mrs Laurinda (Lindy) Nelson from St Mary’s Star of the Sea, Milton; Mrs Belinda Hughes from St Michael’s Thirroul; and Mrs Vicky Davidson from St Francis of Assisi, Warrawong – who, accompanied by two students from their school, were formally commissioned and blessed by Bishop Brian with the support and well wishes of the entire congregation.

Those new teachers and staff who were present were also recognised and warmly welcomed and blessed.

Many gathered commented on the inspiring and uplifting spirit of the occasion, and the enlivened sense of community that was so evident both at the Mass and in the sharing of refreshments in the school hall afterwards.

The night’s joy and wonderful, positive essence were also elevated by the beautiful array of music on offer from our Diocese’s many talented musicians and singers, led by CEDoW Education Officer, Tim Hart. Their selection of songs and energetic delivery only further instilled the sense of hope being celebrated that night and across Catholic Schools Week.

Listen to an excerpt of the song, 'Psalm 39: Happy are they who hope' written by CEDoW's Tim Hart and sung by St Joseph's Bulli's Michelle Bunder, accompanied by the Diocese's musicians and singers.

CEDoW Catholic Life, Education and Mission (CLEM) Education Officer, Amy Sammut, said it was a privilege and pleasure to have organised the evening with the support of a great team of CEDoW staff around her.

“The Mass was indeed an uplifting display of solidarity by hope, filled with people who came together to celebrate the fact that we have the best job in the world serving our students and Catholic school communities,” she said.

WHAT THE CONGREGATION SAID:

"It was a liturgy of passion and commitment."

"I've come from another diocese and we have diocesan Masses but nothing ever like this. This is the best Mass I've ever been to."

"Each of us would have had that 'moment' at the Mass, I'm sure. That awe-inspiring moment where you witness the spirit at work around you in a moment of glory."

"This is the first time I've sat in the loft, and it was such an energising and eye-opening experience to see what happens behind the scenes. I would never have known how much goes into this. I was left amazed."

"It was such a joyful celebration of Eucharist. To see all the priests and hear all the teachers and educators singing 'Bless the Lord, O My Soul' after Communion was an amazing experience."

"There would have been so many young people who have very little experience of Mass, and the music was so good for them. I looked around and could see them all singing and moving and enjoying themselves."

"It was clear the power of the music – 800 people singing in unison with all their heart and soul, you could see impacted many in the congregation. I will take this with me and it will stay with me for a long time." 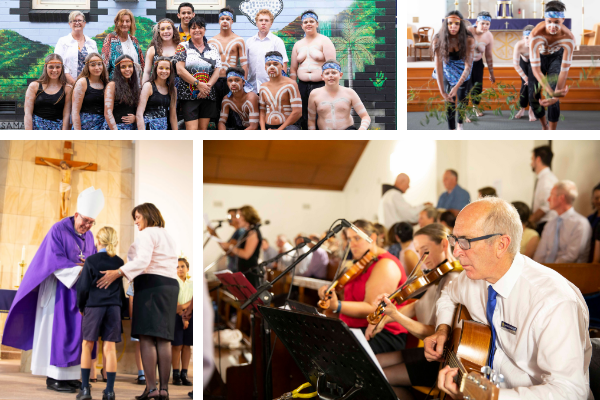 The Mass was also an opportunity for the Diocese to contribute to the ‘Show the Love for Townsville’ appeal and show our communal support for the students, families and staff from Catholic school communities in and around Townsville who have been devastated by the worst floods ever recorded in the region. All the funds so generously donated are being sent to Townsville Catholic Education to give to those families most in need.

Mr Turner thanked all those who attended the Mass and those who had been part of its organisation – including CEDoW Education Officer, Amy Sammut, and the members of the CLEM team; the staff and students of Good Samaritan Catholic Primary School, Fairy Meadow; our student Aboriginal dancers and didgeridoo players; the musicians and singers; and Bishop Brian, Fr Bernard Gordon and the many priests who concelebrated the Mass with them.

“I’m especially grateful that, in the middle of what has been a busy Term 1, so many of you have so generously given your active support to our Catholic community by being part of such a joyous celebration of Mass,” Mr Turner told staff. “It has been a great privilege to be able to share in this with so many of you.”


View all stories in Director's News. View All News and Events.