According to Chinese philosopher Confucius, 'if you’re lucky enough to find a job that you love, you will never work a day in your life'. This belief was shared by Mr Peter Turner recently-retired CEDoW Director of Schools, who, at a recent event celebrating and honouring his lifetime commitment to Catholic education, gave thanks that he, indeed, had chosen work that he loved.

After starting his teaching career at St Patrick’s College, Sutherland in 1974, Mr Turner has dedicated 45 years of his life serving Catholic education, including the last 13 years as Director of Schools, Diocese of Wollongong.

Various innovative initiatives were introduced, including the Lighting the Way Spiritual Formation Framework, Spotlight On Technology conferences, Lighting the Way Education Awards, and a systemic approach to ecological conversion and formation in response to Pope Francis’ groundbreaking encyclical on the environment, Laudato Si’.

Mr Turner’s outstanding leadership and contribution to Catholic education was acknowledged through numerous awards, including the prestigious Australian Council for Educational Leaders (ACEL) Fellowship and the Brother John Taylor Award.

Having touched the lives of so many, it was no surprise that close to 1100 people came together over two occasions to bid farewell and pay respects to a man who had led by example - with courage, integrity, and compassion.

The CEDoW community acknowledged Mr Turner’s retirement with a Mass of Thanksgiving and a Farewell Dinner. 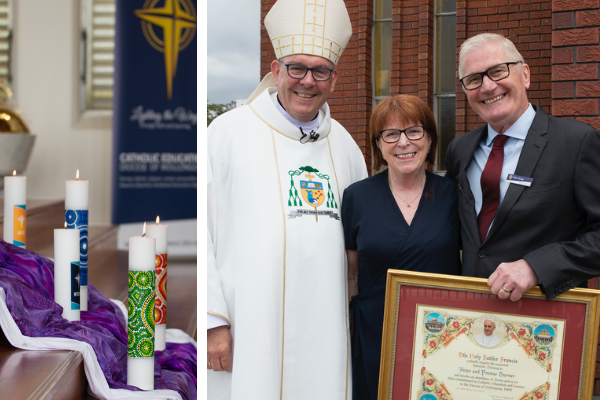 The farewell celebrations began with a Mass of Thanksgiving at St John Vianney Co-Cathedral, Fairy Meadow on 12 December 2019. Over 500 people, including Mr Turner’s wife, Yvonne, their four sons and families, students and representatives from Wollongong diocesan Catholic school communities, clergy, and CEDoW colleagues, came together as one united faith-filled community, to celebrate and acknowledge the exceptional contribution Mr Turner had made to Catholic education.

The heartfelt occasion opened with a moving Welcome to Country by Josephine Ball, CEDoW Aboriginal Education Assistant, and Indy, a student from Stella Maris Catholic Primary School, Shellharbour. The church was then filled with the stirring sound of the didgeridoo, played by students from St John the Evangelist Catholic High School, Nowra as aboriginal dance students from John Therry Catholic College, Rosemeadow performed a cultural dance.

A procession of schools representing each school in the four regions of the Wollongong Diocese followed, and the joy-filled spirit of the event was elevated even further with the angelic singing of the Corpus Christi Catholic High School, Oak Flats student choir. 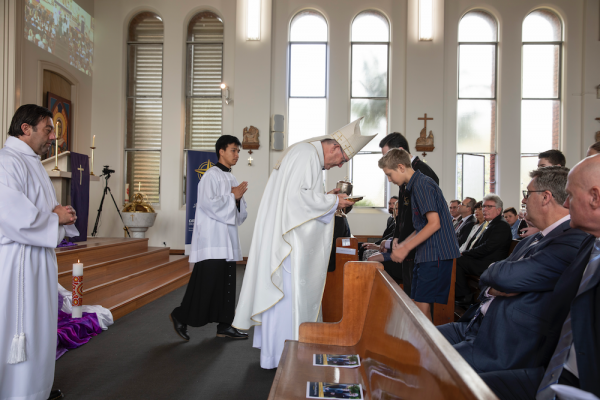 The Bishop of Wollongong, Most Rev Brian Mascord, presided over the Mass of Thanksgiving which was concelebrated by Bishop Emeritus Peter Ingham and Bishop Geoffrey J. Robinson, Auxiliary Bishop Emeritus of Sydney, along with 14 priests from across the Wollongong Diocese. Mr Turner thanked them for their presence and support, particularly Bishop Brian, Bishop Peter and Bishop Geoffrey. “I am deeply grateful to each of these fine men for the impact they have had and the support and friendship they have given so generously to me,” Mr Turner said.

Mr Turner shared with the congregation that the Mass of Thanksgiving had brought together the two great loves of his life: his family and Catholic education.

"Every member of my family, most especially my wife Yvonne, has journeyed with me throughout the 45 years of my working life. They have remained a constant for me throughout the celebrations, the joys, the challenges, and difficulties on that journey, and I look forward to having a little more time to repay that generosity and love," he said.

"My other love is represented today by the students, staff members and principals of our schools. You will not know how much it means to me that this mass is being celebrated mostly with the young people of our diocese. I have believed for all of those years that the only thing that really matters is that we focus on our young people, that we provide them with opportunities to grow and develop in their faith and their learning so that they can take their place in the world. I have been deeply privileged to take this journey with you and I will follow very closely the stories of your success into the future” — Peter Turner, Retired CEDoW Director of Schools

In his homily, Bishop Brian thanked both Mr and Mrs Turner for their commitment to Catholic education, particularly as Director of Schools in the Diocese of Wollongong over the past 13 years.

“Thank you, Peter, for being witness to hope throughout your career as an educator, but more so for being a witness of faith,” he said. “To Yvonne, thank you for standing with Peter and giving him the strength to be that hope. You have shown us what it is to be tolerant, be love, be mercy, be respectful, and be all the things it is to be Eucharist.”

Bishop Brian then surprised Mr and Mrs Turner with the presentation of a Papal Blessing on behalf of Pope Francis.

Following the Mass of Thanksgiving, guests were invited to a luncheon held at Good Samaritan Catholic Primary School, Fairy Meadow, where they could mingle and say their personal thanks and farewells to Mr Turner.

A night of laughter, singing, and reminiscing was shared by 430 colleagues, friends and family, who journeyed near and far to for a formal farewell dinner in Mr Turner’s honour, held at The Cube- Campbelltown Catholic Club on Tuesday 19 December 2019. Attending the celebration were many distinguished guests, including Bishop of Wollongong, Most Rev Brian Mascord, Bishop Emeritus Peter Ingham, and members of Mr Turner’s family who traveled from Queensland to share in the occasion.

Mr Turner’s sister, Kate Saunders said: “Tonight will be forever locked in my heart of the achievements of my brother and the love and respect each of you hold for him.”

Natalie McNamara, former Director of Human Resources, Sydney Catholic Schools, expressed similar sentiments of the evening. “It was a privilege to be there to say farewell to such an outstanding faith-filled, skilled and competent leader in the mission of Catholic education,” she said. “He will be widely and deeply missed.” 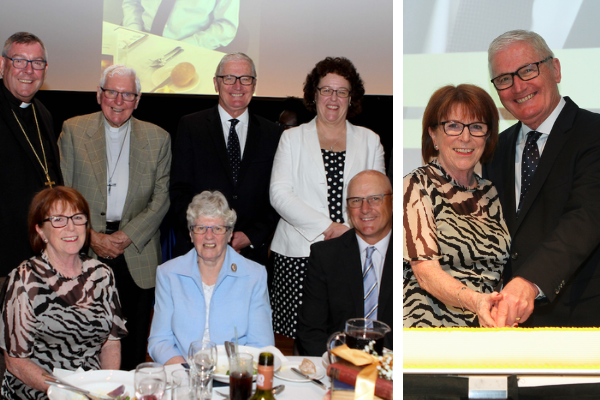 An extremely talented band of teachers and alumni from John Therry Catholic College, Rosemeadow serenaded guests with music throughout the night. Guests were also entertained with touching tribute speeches and testimonials, all of which were sprinkled with a touch of light-hearted humour.

Mr Turner responded with a warm and heartfelt response, thanking everyone for their presence at the dinner. "Gathered here tonight are people from so many aspects of my life, each one of you contributing to, and journeying with me, throughout the highs, and lows, the celebrations, the sadnesses, and successes of the past 45 years," he said. "I have long believed that we are to a significant extent, formed by those we choose to allow into your life..."

“I ask you to always remember that each young person that walks into a Catholic school brings their own story: some come ready to change the world, some come anxious and uncertain, and some come well-supported. Some come well-versed in their faith and some come void of any experience of a loving God. I ask you to always remember that the Catholic school is always founded on the person and actions of Jesus Christ, meaning that we are clear and unapologetic about the things we believe” — Peter Turner, Retired CEDoW Director of Schools

A highlight of the evening was a surprise performance by CEDoW staff, Mr Bede Ritchie, Mr Mark Raue and Mr Neil McCann, who performed a modified rendition of Bette Midler’s Wind Beneath My Wings, highlighting the number of lives Mr Turner has positively influenced during his 45 years of service to Catholic education.

The evening concluded with Bishop Brian and Bishop Emeritus Peter Ingham offering an Irish blessing to the Turner family. 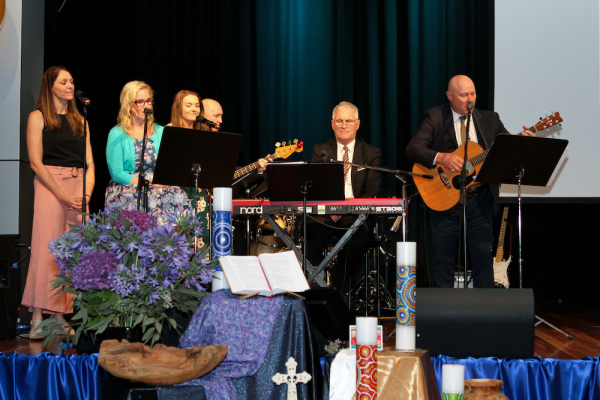 
View all stories in Director's News. View All News and Events.