With only a cardboard tent held together with duct tape to call home for the night, Nicole Van Ingen, Principal of St Mary’s Star of the Sea, Milton, joined 30 CEOs from around the Illawarra to brave the cold and ‘sleep rough’ for a night in support of the Vinnies CEO Sleepout.

CEDoW has long been a supporter of the St Vincent de Paul Society and when the call went out inviting our school principals to be involved, Nicole did not hesitate to volunteer.

For Nicole and her family, homelessness has a face and the issue is personal, as the birth mother of their adopted son, David, has been living on and off the streets for close to 10 years.

“When people are homeless they have to go without a lot, but I just don’t know if they should have to go without their own children,” said Nicole. “Unfortunately, for the safety and well-being of children, families are often separated because of a lack of affordable housing.”

David’s birth mother understood the reality of raising a child in such harsh conditions and wanting the best for her child, made the difficult decision to offer him up for adoption.

Being a Queensland native, Nicole’s main concern for the night was being able to deal with the cold weather. While the rain managed to stay away, the temperature dropped to a low of 6 degrees. Nicole’s worries were made easier in the fact that she had volunteered to sleep out for a night in Wollongong, rather than Melbourne! 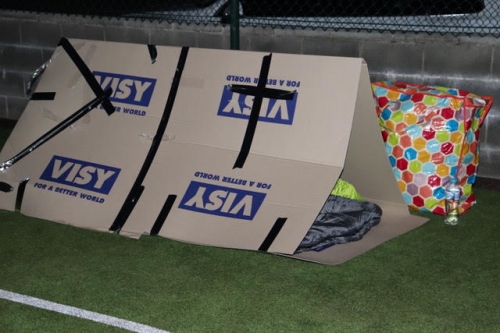 Knowing her family were staying nearby also helped. “The children were very excited about the adventure,” said Nicole. “We drove past earlier and they saw where their mummy was going to work for the night.”

“Being a Catholic agency, it is important that we get behind events such as the Vinnies CEO Sleepout. We don’t want to only be Catholic by name, we want to be Catholic by nature, and events like this are a great opportunity to put our faith into action,” said Nicole.

Nicole also believes it is important that students are taught to have a social conscience and learn to act compassionately towards others. “Sleeping rough for the night was an opportunity for me to show my children, and school community, that we can all do something to make a difference in the lives of someone in need.” Nicole’s daughter has followed her mum’s example and recently joined the St Mary Star of the Sea Mini Vinnies group. 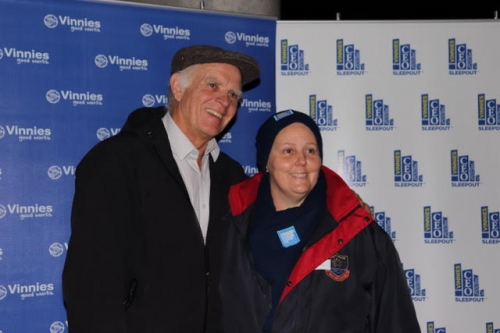 This is the fourth year that a representative of Catholic Education Diocese of Wollongong has participated in the Vinnies CEO Sleepout, with CEDoW’s 2018 fundraising efforts resulting in a staggering $11,186 raised.

This money equates to: 372 meals, 93 beds and 35 individual support programs for people seeking help from Vinnies.

This fantastic effort resulted in Nicole finishing 3rd on the Wollongong event fundraising ladder and set a new fundraising record for CEDoW representatives participating in the sleepout.

Since its inception in 2006, the Vinnies CEO Sleepout has raised more than $42 million to fund Vinnies homeless service across Australia, enabling CEO representatives to actively combat the issue of homelessness by learning more about the issue and experiencing a little discomfort by sleeping out themselves.

Nicole believes that signing up for the event has not only raised much-needed financial support, but also generated discussions in schools and parishes around the issue of homelessness. Statistics around homelessness continue to rise and the demographics of homelessness are changing, but the reality is that those suffering from homelessness often go unnoticed.

“Homelessness has a face and it could be a child sitting in one of our classrooms, or a family in the pew in front of us in Church. Sometimes people get themselves in a difficult situation through no fault of their own and the pain and suffering is real,” Nicole said.

In a happy coincidence, David’s birth mum has just been given community housing.  After 10 years on the streets, she is very much enjoying her first winter indoors in a decade.

Being able to cook a toasted sandwich or make herself a coffee are the simple pleasures that she doesn't take for granted. She even has a fridge now to be able to hang a picture of David and some of his preschool artwork.

Nicole was overwhelmed by the support shown to her by both peers and other school communities within the Diocese. “How lucky am I to work with a huge group of people who support such vital social initiatives. My heartfelt thanks to all who supported this important cause, including those wonderful Mini Vinnies groups in our schools around the Diocese!”

Listen to Nicole speak with Josephine Cooks, Community Development Officer, on the 21 June at the Vinnies CEO Sleepout, Wollongong.

Nicole shared a message for principals in our system who may be interested in participating in 2019. "Aside from the fact that you can't bring extra snacks or food - you have to feel the pain and hunger of homelessness - it's a good night shared with a great group of people, who are very community-minded. I think for next year, we should get together a team of principals and perhaps have a 'fund-raise off' against a CEDoW office team to see how much money could be raised!"

Many of our schools contributed to the fundraising in support of Nicole, including Nicole’s own school community who raised $579.00 by holding a wear your PJs to school day, by gold coin donation. 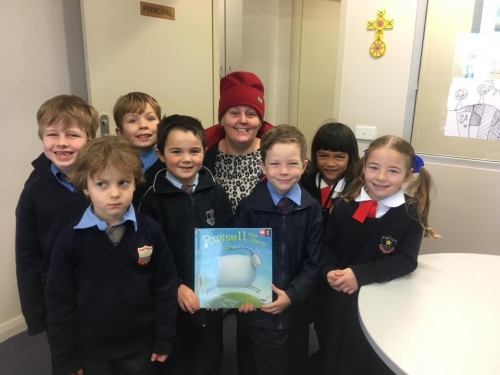 Read below about how St Clare’s, Narellan Vale and St Francis of Assisi, Warrawong coordinated their efforts in support of Nicole.

St Clare’s, Narellan Vale was awash with polar fleece and chenille when their Mini Vinnies group encouraged fellow students to give a gold coin donation to come to school in their dressing gowns! 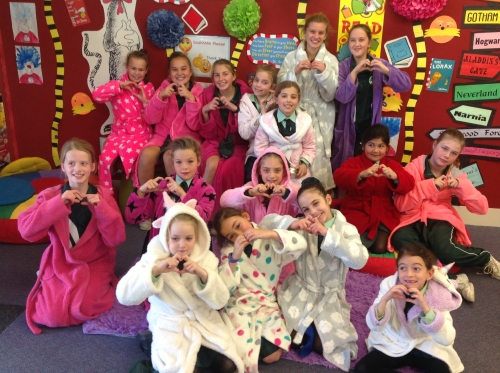 Students across St Clare’s showed their support for the cause and learned a little more about how tough life can be for some people. Many classes were able to watch an informative video and discuss how people become homeless and what that might feel like.

The St Clare’s Mini Vinnies group was thrilled with the support from their school and what it would mean for homeless people. An impressive $700 was raised by the school.

“Dressing gown day raised money to help the homeless, but it’s more than just that, because it can help people like David’s birth mother to be a part of his life. By working together, from small donations we can make big differences,” said Jasmine, Holly and Laura.

“We also raised more awareness about what it’s like for people who don’t have the things we take for granted,” commented Emily.

Mini Vinnies has been active at St Clare’s for the past 7 years, raising awareness about social justice issues and supporting a range of causes including their own local St Vincent de Paul Conference, as well as education in the Pacific Islands, Coats for the Homeless, Project Compassion, Westmead Children’s Hospital and an orphanage in Vietnam.

The St Clare’s Mini Vinnies group has raised over $12,000 to help others who do not have what they have. 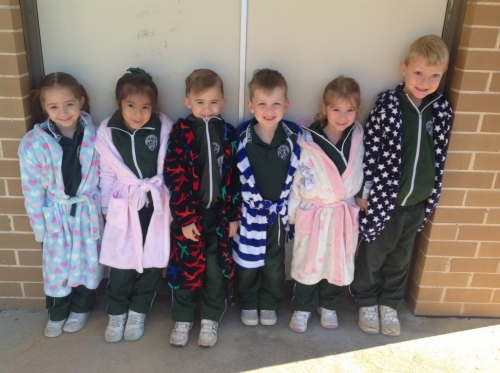 On Friday 15 June, the school held a fantastic pyjama, soup and movie day. The students all brought in a gold coin donation for the privilege of being able to wear their pyjamas to school! The school’s P&F provided soup to sell at the canteen. 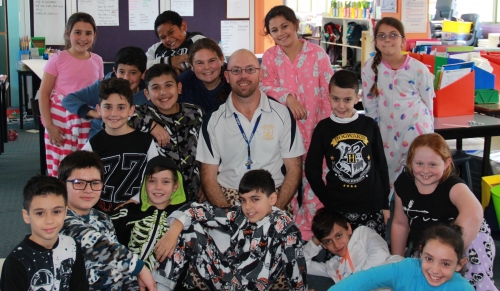 “My name is Shelby and I am in Year 3. This is my first year in Mini Vinnies. I really loved helping collect the canned food for the homeless.”

“It is great that our school can help people in our community who face cold nights on the streets,” said Emilia.

“I am glad that I have had the opportunity to participate in this fundraiser. I think it would be very hard to sleep out on the streets during winter. If our donation can help provide food and shelter to some homeless people, we are making a difference,” shared Izac. 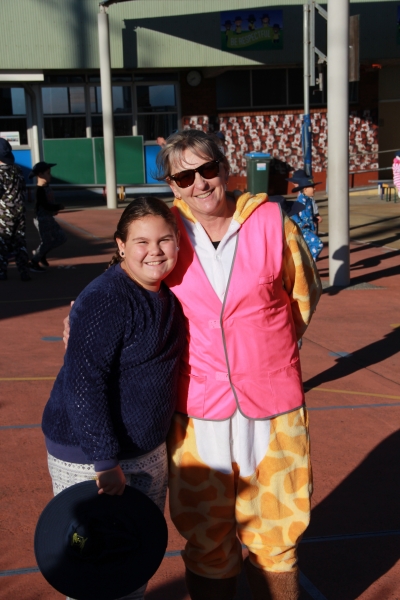 We thank Nicole for her generosity of spirit in representing CEDoW and further thank our CEDoW community for their support in raising money for Vinnies support services.