More women, men, and children are trapped in slavery today than at any other time in history. Recent figures suggest more than 40 million people are severely exploited for the personal or commercial gain of others. Modern slavery is systemic and relies on people just like you and me benefiting from goods and services, without questioning how they were produced-or who may have been exploited in the process.

Catholic Education Diocese of Wollongong (CEDoW) has joined more than 30 Catholic entities across Australia in reaching a significant milestone in the Church’s efforts to eradicate modern slavery. CEDoW’s first Modern Slavery Statement was submitted to the Commonwealth Department of Home Affairs in a compendium of statements by members of the Australian Catholic Anti-Slavery Network (ACAN).

In a message to ACAN Members, the President of the Australian Catholic Bishops Conference, the Most Rev Mark Coleridge has hailed their achievement. “Australia can be a leading force in the Catholic world in seeking to eradicate modern slavery, human trafficking, and forced labour,” said Archbishop Coleridge.

“The Modern Slavery Statements of Catholic entities will form a compendium of Catholic principles and action for the advancement of human dignity and the common good” - Archbishop Coleridge.

The Modern Slavery Statements, which cover the 2020 calendar year, set out the steps CEDoW and other entities have taken to assess and address risks of modern slavery in operations and supply chains, and the plans to better manage that risk in 2021.

Catholic dioceses, health and aged care services, schools and universities, and social services in every state and territory all made statements as part of the compendium. 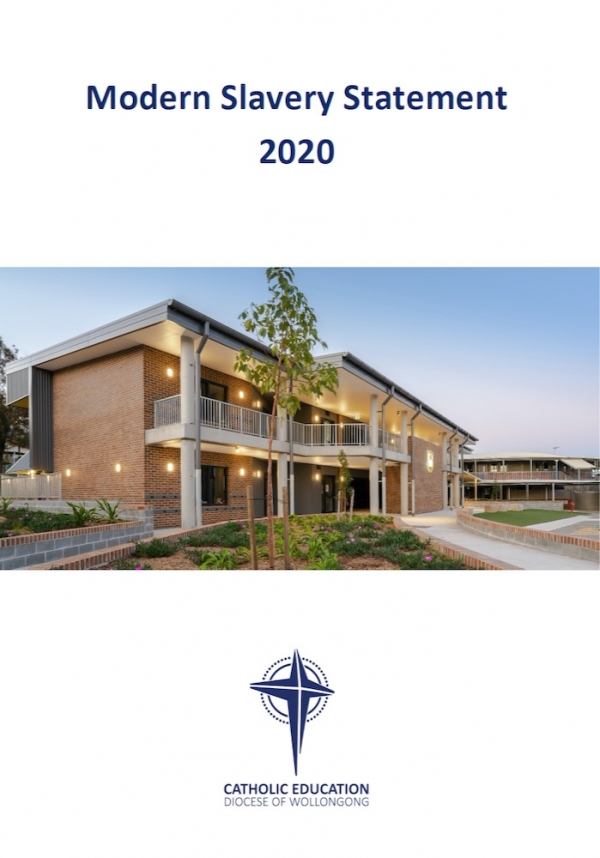 Under the Modern Slavery Act 2018 (Cth), all entities with an annual revenue of over $1 million are required to file a Modern Slavery Statement. However, a number of Catholic entities below that threshold have submitted voluntary statements in solidarity over an issue that Pope Francis has called “an open wound on modern society” and “a crime against humanity.”

Peter Hill, Director of Schools in the Diocese of Wollongong, said Catholic education is committed to the eradication of modern slavery and the exploitation of others.

“Each day, the decisions we make about what we buy and use have a significant impact on the lives of many unique and inherently valuable people and communities across the globe,” said Mr Hill. “Catholic Education Diocese of Wollongong is committed to this responsibility, and we have been working diligently to revise our procurement processes to ensure our operations-at every tier of the supply chain-are not enabled by the exploitation of others.

“With one in five Australian children educated in Catholic schools, we have an obligation to lead with courage and set an example for the students we serve. We will continue to work with the Australian Catholic Anti-Slavery Network to ensure our supply chain vendors uphold the rights and dignity of every person they engage” - Peter Hill.

Submitting the Compendium to the Australian Government is the result of many months of collaboration by Modern Slavery Working Groups and Modern Slavery Liaison Officers, resourced by the Catholic Archdiocese of Sydney’s Anti-Slavery Taskforce. With an estimated 40 million people around the world trapped in modern slavery, Anti-Slavery Taskforce Chair, John McCarthy QC, says there is a lot of work ahead.

“Australia and 190 other nations have pledged to end modern slavery by 2030, by adopting the Pope Francis-inspired UN Sustainable Development Goal (SDG) 8.7, which calls on all to take immediate and effective measures to eradicate forced labour, end modern slavery and human trafficking,” said Mr McCarthy.