Over 70 students from Catholic secondary schools across the Diocese have gathered together to participate in CEDoW’s Secondary Students Social Justice Forum.

The Year 9 and 10 students, many in social justice leadership positions at their schools, travelled to the Xavier Centre in Wollongong to discuss ideas and explore the themes around Catholic social teaching in contemporary society.

The day was about using the teachings of Jesus to enable our young people to have the courage to ‘draw a line in the sand’ and stand up for a just society for all.

“Catholic social teaching promotes a vision of a just society, through the wisdom gathered from scripture, reason, tradition and experience by the Christian community as it responds to social, political, economical and environmental issues through history” - Australian Catholic Social Justice Council, 2016

Guest speakers from a range of backgrounds came to present to the students, highlighting key Catholic social teaching principles, their histories and examples of those principles applied in 21st century life.

All the participants were challenged to find the value that each Catholic social teaching held for them personally, and how they could action it as a leader in their school communities.

Listen to Annabelle and Laura from Mt Carmel, Varroville; Jayden from John Therry, Rosemeadow; Larissa and Liam from Magdalene, Narellan; Montana from Corpus Christi, Oak Flats; and Patrick and Molly from Holy Spirit, Bellambi talk about what they learned from today’s Secondary Students Social Justice Forum:

The Dignity of the Human Person

Deputy Executive Officer for Vinnies in the Wollongong Diocese, Teresa Harm, talked about the dignity of the human person and the idea that all human beings are created in the image of God. All of our Catholic social justice principles are intimately connected to this sacredness of each person, the essence of which is embedded in the Bible - both the New and Old Testament. Harm discussed how we are called to love, honour, respect and demonstrate dignity for each person, and what this means for us each and every day.

The Dignity of Work and Rights of Workers

CEDoW Legal and Industrial Officer, Natasha O’Donoghue, canvassed the dignity of work and workers. She said employees had both rights and responsibilities in the workplace. Some of those rights include a minimum wage (from the notion of a fair day's pay for a fair day's work), fair work hours with adequate rest, safe working conditions, pensions, leave and other benefits.

O’Donoghue explained how these rights directly impact on young people today, especially when they apply for and take on new jobs, casual jobs and internships.

She gave the students practical advice and awareness around their rights in the workplace, including that training should be provided to workers on induction; that it isn’t ok to be paid in food or services, rather than money; that you should get a pay slip each time you are paid; and that you cannot be dismissed because you are injured or sick.

CEDoW Wollongong Environment Network convenor, Beth Riolo, inspired students around the concept of stewardship of creation. Through videos and presentation, she explored the concept of ‘walking lightly’ on the earth and challenged all in the room to consider how they live on the planet and with each other.

“Stewardship of creation links to our Catholic belief that the goods of the earth are gifts from God, and are intended by God for the benefit of all,” Riolo said, “It is about responding to both the cry of the earth and the cry of the poor - these principles of Catholic social teaching are intertwined and so, we are called to have an integral approach to justice for the planet and justice for people.”

She ended her presentation by engaging with the students on the things they could do to contribute in a positive way, so they too were part of the solution and not the problem.

Preferential Option for the Poor

Youth and Young Adult Coordinator for Vinnies in the Wollongong Diocese, Courtney Deighton, explained that a preferential option for the poor is not pity or charity, but justice. While we are all born with equal human worth before God, we are not born in equal circumstances, so it is just to ensure the poor are looked after for needs they cannot fulfil themselves.

“Unfortunately, we in Australia do not put our most vulnerable first,” Deighton said, “We have a very high rate of poverty (13.3% of the country, or 2.99 million, living below the poverty line – ranking 22nd in comparison to other developed countries) and over 116 000 people experiencing homelessness every night.”

“As those who are born with more, we must give up something of ourselves to even out the playing field for those born with less,” she said, giving examples of how we can use our voice (advocate and vote), our wallet (live simply, give to the poor, and ensure we purchase things free of exploitation), and our time (volunteer and spend time to advocate) to do so.

“We are one human race despite our differences,” she said, “Solidarity is respecting the rights of vulnerable individuals and groups.”

The idea of ‘subsidiarity’ means all people have the right to be involved in the decision-making process that affects their lives. Ward-McCann used indigenous communities around the world as an example, saying subsidiarity was necessary for those communities to have full participation in society.

She informed those gathered of some of the barriers to subsidiarity and participation in modern society, including poor health, low literacy and numeracy levels, racism, government policies, lack of representation in Parliament, conflict and geographical isolation.

The morning was also interspersed with beautiful musical reflections from CEDoW’s Mark Raue, and professional musician, Joel Robards. Students were treated to a mix of social justice songs from the likes of Midnight Oil, Paul Kelly, Bob Dylan and U2 that emphasised the forum's themes. The duo - guitars in hand and harmonica at the ready - even adapted some of the lyrics they sang to make them particularly relevant and meaningful for the day’s participants.

Listen to a sample of Mark Raue and Joel Robards' musical reflections: 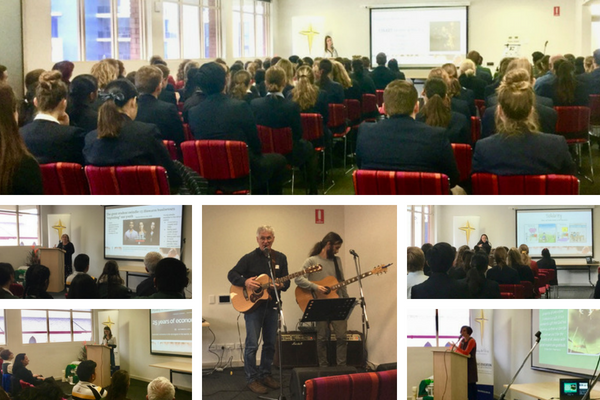 Several of the presenters then formed an impressive panel for the afternoon’s Q&A session. Students asked thoughtful questions that demonstrated their willingness to learn and take on the ideas that had been discussed throughout the forum, and in return, benefited from the panel members’ expertise, experience and wisdom.

Organiser of the event, CEDoW Community Development Officer, Josie Cooks, said the event provided an opportunity for those who attended to engage with and respond to the needs of the marginalised and disadvantaged.

“Schools are doing such wonderful work in the area of social justice and this was an opportunity to remind students of WHY we do what we do,” she said.

“Catholic social teaching is a central and essential element of our faith and forms the foundation on which social justice in our Catholic school communities is based.

“Our students have a growing awareness of the critical social issues in today’s society such as homelessness, refugees and poverty brought on rising economic costs, so the theme was very relevant to them.” 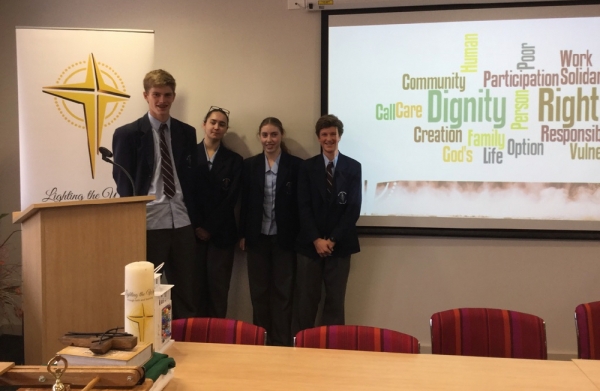