Posted 10 May 2021 by Catholic Education in News

More and more local parents are choosing to send their children to our Catholic schools. Catholic schools in the Diocese of Wollongong have experienced a 17% increase in students over the past decade, with 2021 enrolments representing an almost 2% increase over last year’s ﬁgures.

While the inclusive faith-based environment and values remain a key drawcard for parents, a recent survey of parents and students conducted by Catholic Education Diocese of Wollongong found that among the top reasons families are choosing Catholic schools are also:

“We hear time and again from parents and carers that they value so much more than what is recorded on a report card,” he said.

“While the academic growth of students is always the focus of our schools, as Catholic educators we know for students to thrive their mental, emotional, physical and spiritual wellbeing must be prioritised” — Peter Hill, CEDoW Director of Schools 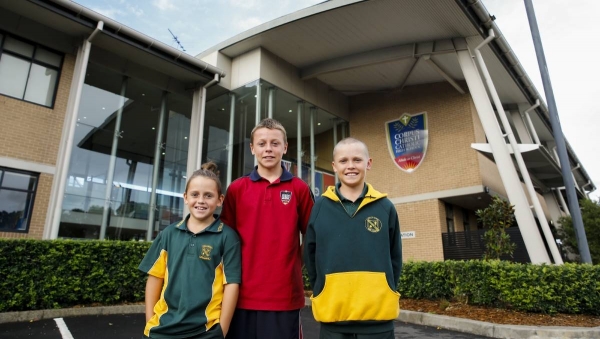 For Shellharbour parents, Matthew and Shayni Smith, it was the emphasis on respect and pastoral care offered by Catholic schools that made the choice of where to enrol their children easy.

“My husband is Catholic, but I’m not,” said Mrs Smith.

“We just wanted a positive family-friendly school where our kids would be happy and well supported. We found Catholic schools offered a much better environment to bring out the best in our children” — Shayni Smith, Catholic school parent

For the Smiths — who have children at Stella Maris Catholic Primary School, Shellharbour and Corpus Christi Catholic High School, Oak Flats — the beneﬁts of Catholic schools became most apparent after one of their children spent a year at a school outside the Catholic system.

“All ﬁve of our children attended Stella Maris and had a great experience,” said Mrs Smith.

“Our eldest child went on to Corpus Christi, but it wasn’t until one of our children attended a non-Catholic high school that we realised there was a really big difference in the quality of the school experience.

“We’ve since moved him to Corpus Christi and he is thriving.”