mBots at the ready! School versus school, mate versus mate, it was game on for the regional rounds of CEDoW’s 2018 mBot Coding Competition. Students from Years 2 to 10 across the Diocese have used the fun, competitive atmosphere as an opportunity to test out their coding abilities across a range of robotics challenges.

A part of CEDoW’s STEM initiatives, the mBot Coding Challenge invited teams of students from CEDoW primary and secondary schools to gather for a day where they could showcase their creativity, resilience and teamwork, and hone their STEM-rich thinking and coding skills. 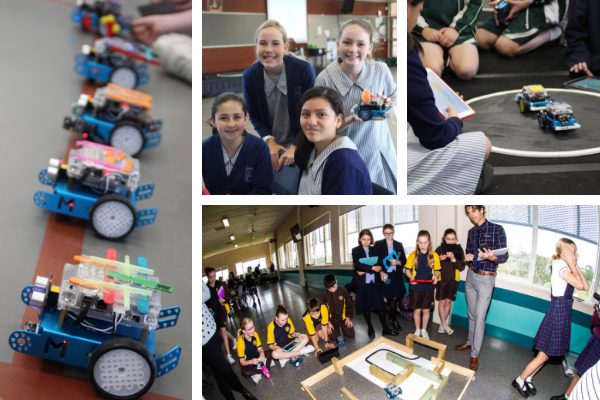 During Term 3, students from Oran Park to Kiama were busily working on learning to code in preparation for three main challenges on the day - coding and choreographing a robot dance routine in the ‘So You Think Your Robot Can Dance’ competition; navigating a mBot through a maze in the 'A-Mazing Race' competition; and programming a mBot to wrestle other mBots out of a sumo ring in the 'Sumo Stadium' competition. 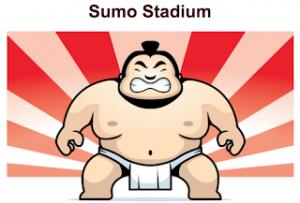 Get your mBot ready for battle in the ancient Japanese art of sumo wrestling. Program your robot to search for your opponent using its ultrasonic sensor, and when found, attack!

Two robots are placed 10cm apart, facing outward, in a ring - a timber disc area with an 80cm diameter, the in-bounds marked by a thin white border at the perimeter of the ring.

Once the match has started, the mBot cannot receive any outside assistance. The autonomous robots must try to avoid falling out or being pushed out by the opponent robot. The first robot that touches outside of the ring loses the round and the match is over.

All robots compete in at least 3 matches, with the best robots going through to the finals. 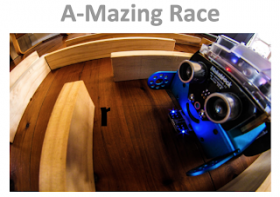 This competition tests the robot's response to its sensors, accurate movement and strategy of the programmer. The objective is for the robot to locate the opening and exit the maze from each of the three starting positions in the shortest time possible.

The maze is 1.2m x 1.2m and contains a border around the outside, as well as for the maze elements. The exact layout of the maze is not revealed until 30 minutes before the competition begins. Each team must use this time to code three different strategies for the three different starting-point-to-exit pathways.

Any robot that does not exit the maze within 120 seconds is stopped and assigned 120 seconds for that attempt.

The total of each team’s times is their final score, with the lowest total score winning.

So You Think Your Robot Can Dance

There are two phases to this competition, both of which involve coding the robot to be autonomous. The robots can be decorated in any fashion, with points being awarded for student made designs. Teams can supply their own surface, marked or decorated in any way they choose.

In Phase 1, teams must code a single robot or a team of robots to dance to music of their choice for 1-2 minutes on a 1m x 1m dance floor. The task is to entertain, delight and thrill the audience.

Phase 2 involves choreographing a dance for their robot onsite. Teams are given a song and a 30 minute time period to code their robot using the skills learnt previously, with points awarded for the quality of the programming and choreography.

Another element of the competition designed to further boost student learning was the MacKillop tokens, encouraging teams to, as Mary MacKillop said, 'never see a need without doing something about it'. Teams were given tokens that they could pass on to other teams of students who helped them out - the team with the most tokens winning the prestigious ‘MacKillop Award’. The concept helped build the capacity of all students, with teams that were doing well being motivated to assist, share ideas and code, and collaborate with other teams.

Click here to skip to the MacKillop Award winners and competition results.

There was unanimous agreement from the teachers present that, as a result of this competition, the students had significantly developed their coding skills to solve challenges, their ability to work as a team and their resilience. Teachers and students both said they greatly enjoyed participating in the challenges and wanted more opportunities to participate in such STEM activities. 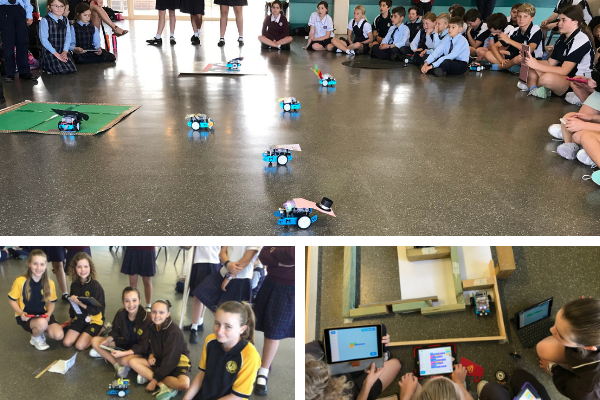 Magdalene Learning Technologies Coordinator, Danny Avalos, said as the day progressed, students constantly worked on refining their code and were fully engaged with all aspects of the challenges.

“But the thing that impressed me the most was that our students identified younger primary school students who were having problems with their coding and set about helping them improve their code to give them a better chance in the next rounds.”

Magdalene went on to win the MacKillop Award for the northern mBot regional competition.

Year 7 Magdalene student, Declan (pictured below), decided to enter the Sumo Stadium challenge as a one-man team. Mr Avalos said Declan had worked diligently since then to master coding his mBot for the competition.

“Declan has been the first student in the library at lunchtime to collect his mBot and start working on teaching himself how to improve his coding skills by watching online tutorials and experimenting with his mBot,” Mr Avalos said.

“He is a quick learner, and after just a few days, Declan had his mBot dancing and following his coding commands. He even modelled a 3D-printed scoop to go on the front of his mBot to help push his opponents out of the sumo ring!”

Declan needn’t have doubted himself, going on to beat all the teams and take out the secondary Sumo Stadium competition. By the end of the day, he had primary students crowding around him asking for help to code their mBots, too! 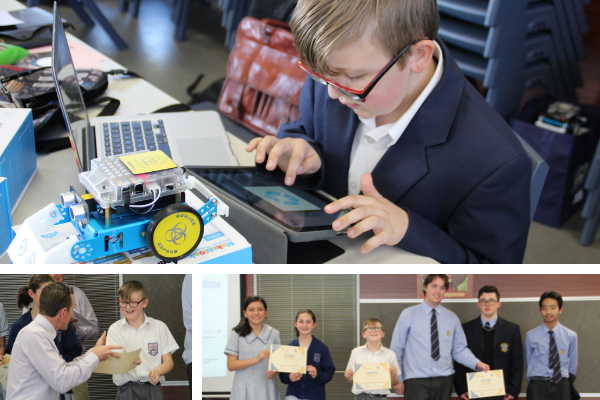 “I enjoyed Sumo Stadium the most, because I liked being challenged and having to create solutions, and competing against other students. It was a great day and I learned more about coding and working with others. I definitely look forward to doing more STEM activities and entering more competitions like this,” Declan said.

Achieving this success has now improved Declan’s confidence and he is very motivated to continue his coding work. He has already started planning for the finals later in October.

“I would go into another coding mBot challenge or activity like this in a heartbeat,” fellow Year 7 student, Kate, agreed. “It was well organised and very productive. I became so passionate about mBots, that I've now bought my own mBot!”

“The day was very educational, which increased my knowledge about STEM. It also taught me how crucial it is to work with a strong team,” classmate, Cynthia, said.

Year 3 Nazareth student and Naz Sumo Girlz team member, Pippa, enjoyed seeing the battles and the different weapons used by teams in the Sumo Stadium challenge. “It was good to see other people use their codes to try and outsmart their opponents. It was the best Monday I have ever had,” she said.

“Yes, it was one of the best days,” Joseph from the Naz Sumo Boyz chimed in. “I like how other people had different codes and different ideas.”

Nazareth’s Year 6 team, the Naz-Mazers, competed in the A-Mazing Race and described it as challenging, but a lot of fun. “We had to figure out how far the robot needed to go, and then we had to change the code when it didn’t work. It was trial and error, and we had to persist. We enjoyed working as a team and making friends,” they said.

“It was also great having other people there to support us. The Mary MacKillop tokens encouraged us to help others, too - like Mary MacKillop said, ‘never see a need without doing something about it’.”

Even after the challenge had finished, the boys wanted to keep perfecting their code.

When it came to spectating, the Naz-Mazers most enjoyed the Sumo Stadium finals. “It was very competitive! The crowd was cheering for the teams and it was engaging,” they said. “It brought everyone together and we had a lot of fun.” 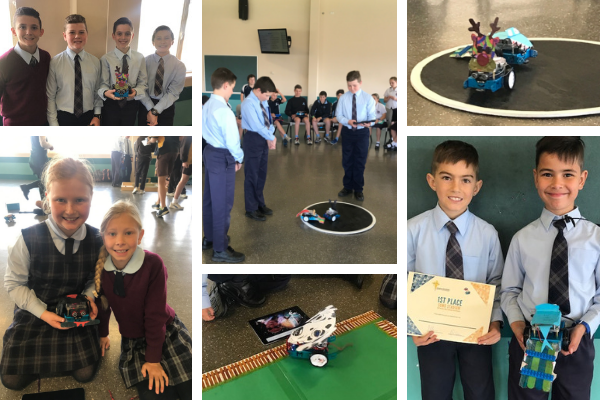 Nazareth’s Year 2 team, the Naz Bot Dancers, participated in the So You Think Your Robot Can Dance challenge, connecting their robot to an iPad and programming it to dance to the Taylor Swift song, ‘Shake It Off’. They may have been the youngest competitors, but that was no barrier to success - the team took it up to the competition and ended up winning the primary division!

“My favourite part was when all of the robots got to dance at the same time,” team member, Gabriel said.

“I loved how we got to show everyone what we programmed with the robot,” Indi added. “When I got home, I was jumping around so excited that we won.”

The top three winning teams from each division will come together to compete at the Diocesan finals during the DoW Spotlight on Technology 2018 event on October 24 at the Campbelltown Catholic Club.

Congratulations to all the teams who participated, and good luck to those students competing in the finals. Happy coding!