Students at St Justin's Oran Park have rocked up to school with some spectacular crazy hairdos to end Term 2! The children sported many fun looks – tall hair, glittered hair, and even rainbow-coloured hair with monster faces – to raise funds and awareness for cystic fibrosis in support of one of their own.

The Crazy Hair Day was a chance for the school community to rally around student Domenic Spagnolo, who was diagnosed with cystic fibrosis (CF) at six weeks old.

Domenic, 10, was joined at the school event by his mum Sage and sister Valentina, eight. Ms Spagnolo said it was an amazing show of support from St Justin's students, staff and parents.

"I didn't expect this at all. Domenic can be shy but he has really embraced the day. He has great friends and the staff here are so willing to help" — Sage Spagnolo, parent, St Justin's Oran Park 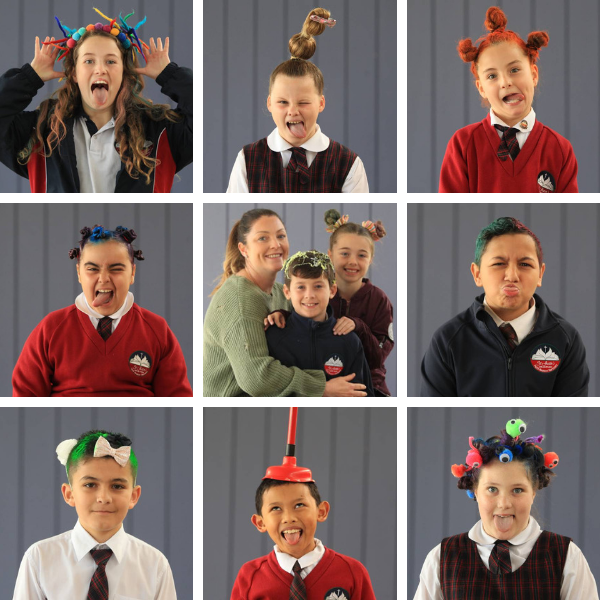 Domenic battles with CF every day. He undertakes two hours of physiotherapy and nebulised treatment (device that assists with lung circulation) every morning and night. He also takes 25 tablets daily and is also tube fed every night.

The Camden South family visits The Children's Hospital at Westmead every eight weeks, where Domenic undergoes a series of health assessments.

Ms Spagnolo said her son had shown "incredible" bravery. "It's a cliche, but Domenic is my hero. [CF] is all he knows, he gets on with it and rarely complains," she said.

"But Domenic is also the class clown. He has a great personality, he is always joking and doing pranks."

"We want to create an awareness for families about some of the challenges that the kids face. It's about being together and doing things to support each other" — Kevin Devine, principal, St Justin's Oran Park

The day raised $850 for cystic fibrosis research. Congratulations to all those in the school community involved in making the day such a success.