Public speaking is something that many people are afraid of undertaking. According to research, it tops our biggest fears, and is one of the world’s most common phobias – but it isn’t a concern for the students who attended this year’s Catholic Development Fund Diocesan Public Speaking grand final - an annual competition which challenges students to develop communication skills, confidence, motivation and knowledge sharing.

Held at St Thomas Aquinas Bowral, twelve students from Years 5 and 6 took to the stage one by one. Required to deliver a pre-planned speech in front of a large roomful of people, it’s a challenge which would make many adults shudder. However, the competition was taken in the stride of all attendees from primary schools across the diocese.

In the lead-up to the event, the student competitors were given topics to choose from. These included: 'Every child matters'; 'What makes an Australian'; 'Human rights and wrongs' and 'There’s no ‘I’ in team'.

From this starting point, the student’s imagination flourished and every speech was unique in its content and delivery, containing personal anecdotes and famous quotes such as Dr Seuss’ "Unless someone like you cares an awful lot, nothing is going to get done. It’s not”.

One of the winning speeches addressed the notion of world peace under the category ‘It’s complicated’. To the amazement of the audience, the speech – delivered by St Paul's Camden Year 6 student, Domenico – suggested that there's not a one-size-fits-all solution to uniting different societies: "We need to change the hearts and minds of people who are filled with deep-seated prejudice and hate. We need more leaders who can rise above their own human weakness for the greater good," he shared. 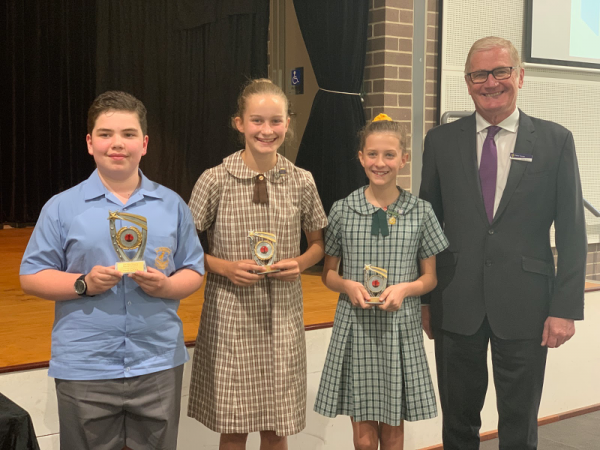 At the start of the event, the crowd – which included family, friends and educators – were welcomed by St Thomas Aquinas Bowral Acting Principal, Kayleen Petzer. It was also attended by members of the Catholic Education Office, including CEDoW Director of Schools, Mr Peter Turner.

“This competition is important, as it allows students to showcase their skills and express their thoughts in a public speaking forum,” said St Thomas Aquinas Bowral Acting Assistant Principal and convenor of the competition, Mrs Jo Robinson. “The speeches were of a very high standard and the audience was both informed and entertained by the students over a range of topics.”

The judging panel was made up of adjudicators with experience in public speaking – Mrs Susan Newton, from Southern Highlands Toastmasters, and St Benedict’s Oran Park Middle Leader, Mr Andrew Lundy. According to Mrs Robinson, their job was a “difficult one” due to the quality and standard of the student speakers.

Congratulations to the following students [pictured in feature photo: Chloe, Lilia and Cody], who were successful in placing in this year's competition:

Chloe W - St Joseph’s Bulli (Topic: What happens when it all runs out?)

Cody D - St Clare’s Narellan Vale (Topic: What happens when it all runs out?)

Congratulations to the other successful Year 5 competition entrants:

“This is such a huge achievement and reflects Chloe’s hard work, commitment and willingness to grow as a learner,” said St Joseph’s Bulli Principal, Mrs Jen Charadia. “Thank you Chloe for representing our school so well. We are very proud of you - a diocesan champion!” 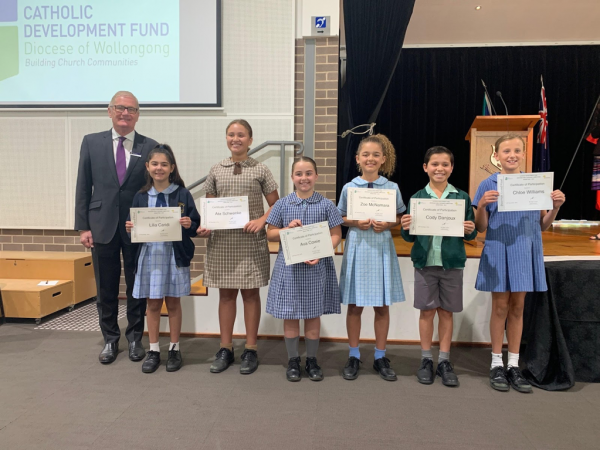 Congratulations to the following students, who were successful in placing in this year's competition:

Charlotte R - St Therese West Wollongong (“Sometimes you will never know the value of a moment, until it becomes a memory.” Dr Seuss)

Congratulations to the other successful Year 6 competition entrants:

It was a second-time victory for the first place-taker. “In fact, Domenico won the Diocesan Public Speaking competition in Year 5, last year, as well as in Year 6 this year,” said St Paul's Camden Principal, Mr Michael Reardon. “It is one thing to achieve this once in a lifetime, but to achieve something as significant as this twice before high school makes it an even greater achievement.”

According to his teachers, the young student drafted his speech with minimal help and was praised for delivering it with sincerity.

“I'd like to say that Domenico's success has largely been a product of the huge support provided to him by the school,” said Mr Reardon. “However, in reality, I'm proud to say that it was all Domenico and we admire his achievement even more so. It was a good day for St Paul’s overall, as our very own Lilia came second in the Year 5 competition. Lilia's speech was delivered with passion and authenticity and we are just as proud of her.” 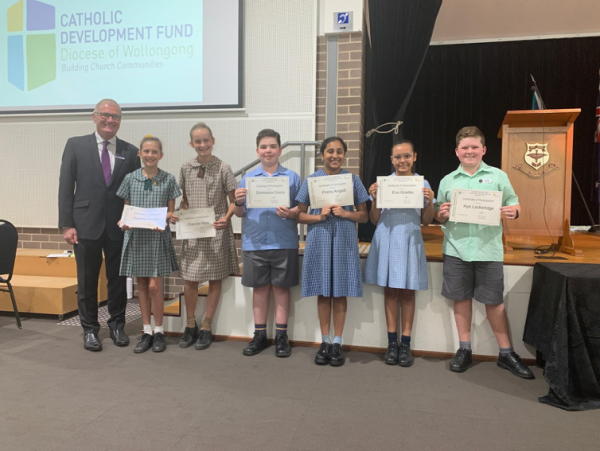 For every speaker who stepped into the spotlight, it was a momentous occasion.

“The things I’ve been fortunate enough to experience [through the competition] are something I’ll never forget,” said St Joseph’s Bulli Year 5 student, Chloe who spoke about environmental factors and animal welfare in Australia,  “I don't think I’ll ever feel more proud and happy as when I look at my trophy – I’m so thankful for this experience.”

CEDoW wishes to acknowledge the Catholic Development Fund for their ongoing financial support of the Diocesan Public Speaking regional competitions and grand final, which allows this opportunity for our students to continue every year.