News | Faith In The Future: Diocese Of Wollongong Celebrates 200 Years Of Catholic Education

Posted 25 May 2021 by Catholic Education in News

A celebration to mark the bicentenary of Catholic education in Australia was held on Dharawal land this week, with students from 45 Catholic schools across the Diocese of Wollongong—from the Macarthur, Illawarra, Shoalhaven and Southern Highlands—gathering as one community of faith.

In her welcome address, Head of Service Jo Kenny shared that the National Mass was being celebrated simultaneously across Australia on the Feast of Our Lady Help of Christians.

“We gather to remember and honour our beginnings, acknowledge with pride the journey, be grateful for today and look forward with faith, courage and hope to the future" — Jo Kenny, CEDoW Head of Service

“Today is an opportunity to recognise and give thanks to the many religious congregations who contributed to the establishment and ongoing viability of our schools at different points in our history,” Mrs Kenny said.

"We thank them for their commitment, passion, vision, determination and their relationship with our loving God that motivated and inspired them in their endeavours.” 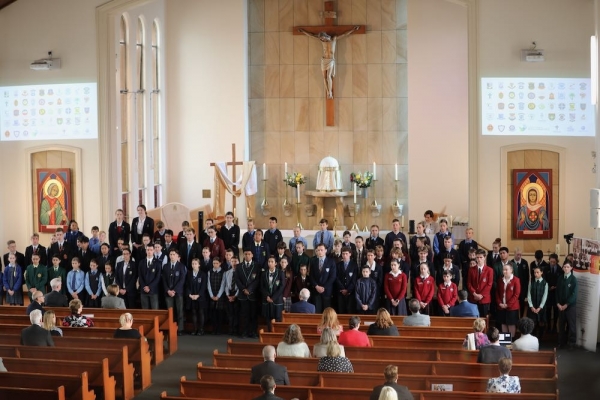 In a poignant moment, the Mass began with an entrance procession of schools in order of their foundation year, acknowledging the leadership, commitment and exceptional contribution made by both lay and religious educators to Catholic education in Australia over the past 200 years.

Notably, the first Catholic school in the Diocese of Wollongong, was established in 1828 in Campbelltown, with St Francis Xavier Catholic Parish Primary School opening in Wollongong in 1838.

In a tribute to the women and men who served our diocese’s students and schools over the last two centuries, a new book, ‘Lighting The Way: A History of Catholic Schooling in the Diocese of Wollongong 1828 - 2020’, was officially launched with each school taking home its own copy.

Director of Schools Peter Hill said the Mass was a highlight of the bicentenary year.

"Throughout the last two centuries, thousands of dedicated women and men, often with very limited resources, rose to the challenge of building the vibrant and diverse Catholic education system that exists today," Mr Hill said.

"As we reflect on the important work of Catholic education, we remember the intergenerational contributions that preceded us and that we continue to build upon" — Peter Hill, Director of Schools

"Since the very first Catholic school was established in NSW in 1820, countless children and young people have benefited from the dedication and commitment of faith-filled staff in our Catholic schools."

Thanks were extended to those responsible for the celebration, particularly the members of the Catholic Life, Education and Mission team, and all those who prepared and were involved in the liturgy. Also to the staff and students of our schools for travelling from the breadth and width of our diocese to make such a strong statement of unity and spirit for the significant celebration.