While many take for granted the Queen’s Birthday public holiday as a chance to enjoy a long weekend, a Kindergarten student from Ss Peter and Paul, Kiama certainly did not.

Young Harry McInnes was amazed that he received a whole day off from school on Monday 11 June and wanted to know more about this holiday.

Harry’s grandmother, Jennifer Keating, explained to Harry about the public holiday and that it was for the Queen's Birthday.

Harry was very excited about the day off - and the Queen’s Birthday - and suggested that they should write to the Queen, to congratulate and thank her.

Harry’s mum, Jane McInnes, said, “Harry took a lot of interest in the Queen’s Birthday. We were really surprised that he wanted to write a letter to the Queen.”

Dear Queen Elizabeth, my name is Harry McInnes and I am six. I go to Ss Peter and Paul, Kiama in Australia. Thank you for giving me the day off for your birthday. I was so happy. I like school a lot, but I really like the weekends and school holidays - they are the best and I really like to go to the park with my mum and dad. This is a picture of my sister, Georgia and me. Georgia is four but she doesn't go to school yet.

Mrs Keating penned a note to accompany Harry’s letter, explaining why Harry was writing, just in case the Queen couldn’t understand his writing.

Within this note, she mentioned that she had met the Queen at a reception in Sydney many years ago.

Harry and his grandmother then went on a trip together to post the letter, direct to Buckingham Palace.

Dear Harry, the Queen wishes me to write and thank you for your lovely letter which your grandmother, Mrs Keating, kindly sent to Buckingham Palace in London. Her Majesty was pleased to hear from you and to see the photograph you enclosed in which you appear with your sister, Georgia.

Mrs McInnes said that no one in the family believed Harry would actually receive a response.

“It came as a wonderful surprise. Harry could not believe the Queen had written to him and he was very happy with himself,” she said. 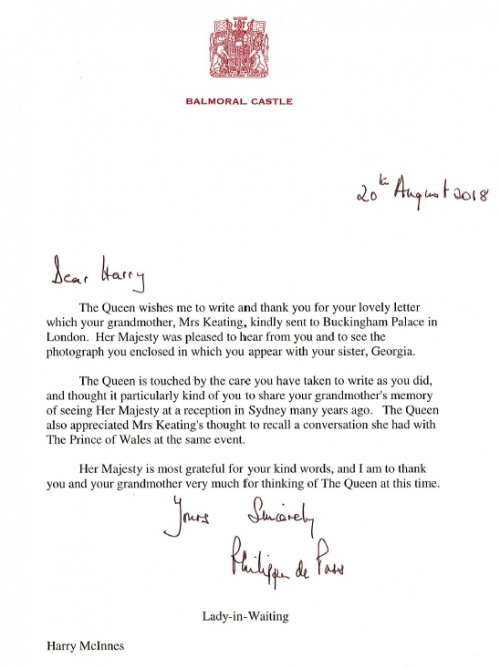 Thank you for sharing your wonderful news with us, Harry.