There’s nothing like a shuffleboard table to bring some of Macarthur’s oldest and youngest folk together. Magdalene Catholic High School, Narellan hosted Carrington Aged Care residents in an inaugural inter-generational shuffleboard competition on Tuesday.

The event helped strengthen the unlikely relationship between the schools in recent years, with highlights including a back to school day for Carrington residents and a “this is your life” short film project shot by students at the aged care facility.

Ms Borg said the school was proud to support a unique sport like shuffleboard.

“Shuffleboard provides easy access for seniors to play,” she said.

Tuesday’s competition was organised by Shuffleboard Australia and business development manager Andrew Mortimer said it was a great opportunity for students to bond with the Carrington residents.

“While shuffleboard itself is great and a lot of fun, it’s also a vehicle for bridging the gap between generations,” he said. “The students didn’t feel obliged to be there and they were happy to talk with the residents.” 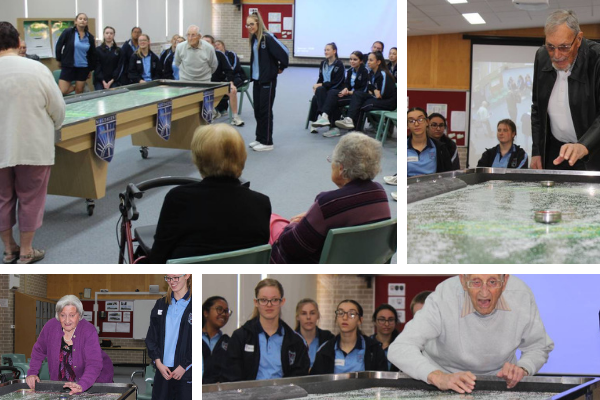 Shuffleboard involve players using their hands to push weighted pucks down a long, wooden table that has been dusted with powder into a scoring zone at the opposite end.

Tuesday’s participants were given a rundown of the sport’s rules by Mr Mortimer and his father Steve, former rugby league star for the Canterbury-Bankstown Bulldogs.

The Magdalene students appeared to learn quickly and claimed the bragging rights with a thrilling win.

Two teams of four players represented both Magdalene and Carrington with a series of matches culminating in a grand final.

“The Carrington residents were holding a two-point lead on the final end before the students knocked their puck off the end of the board to win,” Mr Mortimer said. 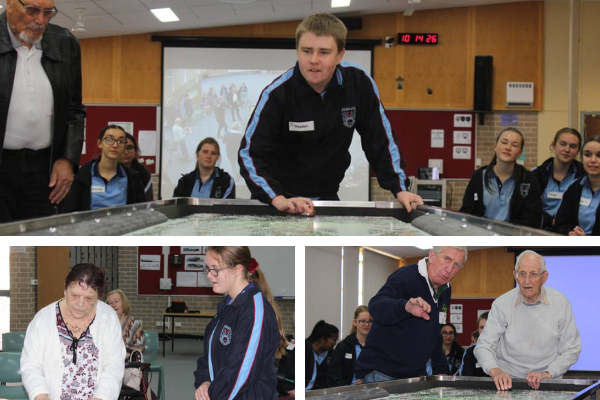