On Saturday 1 December, five Year 10 students from Magdalene Catholic High School, Narellan will be launching a high-altitude balloon into near space in Binya, in NSW’s Riverina region. This comes after two years of planning and devoted work, with the students aiming to reach for the stars!

In 2016, the group of then-Year 8 students collaborated to design, construct and program a payload (space probe) which has the ability to record data from near space via a high altitude balloon.

Their work was part of CEDoW's Spotlight on Technology event competition which aims to promote STEM subjects amongst students and develop a new range of STEM skills to use during their studies and future careers.

The team called, 'The Big Equation', won the Mission to Space competition and have spent the last two years preparing for this Saturday’s exhilarating launch. 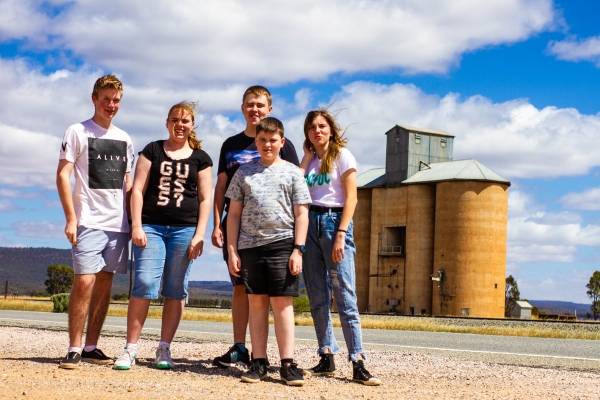 Earlier this year, the launch was confirmed and the team had to upgrade the design of their probe to be a 15cm³ cube which included batteries, two flight computers, sensors and non-electrical experiment materials.

The group of enthusiastic students are hoping to use these sensors to record data about air pressure, temperature, UV light and radiation that is present in near space, as well as recording GPS location, speed and battery voltage.

The team have also put together a series of non-electrical experiments including tests to see how near space’s radiation may affect the growth of basil and bean seeds. They're also sending popcorn kernels and chocolate up with the high-altitude balloon.

Magdalene teachers, Mr Peter Collins and Mrs Gemma Brislane have supported and championed the students, from the competition in Year 8 through to this weekend's launch.

Listen to Alan Ibbett on ABC Riverina's-Breakfast with Anne Delaney

The students have thoroughly enjoyed the STEM initiative and hope that it will benefit them in the future.

Josh, a student from the team, said the project has been insightful. "It has given us a taste of what it would be like to be an engineer and awareness of how to work well as a team and as individuals.”

Larissa, team leader, said she enjoyed the unique STEM experience. “Not many students get to be involved in a project like this, I'm really grateful for the learning experience. I have learnt a lot of new technical and leadership skills which I hope to take into my future studies and career."

The Big Equation’s designer, Isabella, has loved that she has been able to bring her talent in visual arts into the project. “I really enjoyed bringing what I know into a completely new field, it has been amazing."

The students are attaching an action camera to the probe, hoping to capture a photo from 112,000 feet - like the famous photo Earthrise, depicting the curvature of the earth.

The devoted team are eager to launch their high-altitude balloon into near space and are excited to see how two years’ worth of their hard work will pay off.

The launch will be live-streamed and the balloon will be able to be tracked using an APRS tracker.

Success - the space launch went extremely well. The probe arrived back on earth safely, with all data intact. "It was perfect, the kids learnt so much from the experience and will remember this forever," shared Alan Ibbett.

It was quite the adventure for the team to retrieve the probe from a canola paddock in Barmedman, via a sheep farm!

There are some great photos (view photo gallery below) and interesting data to be analysed.