Posted 27 May 2021 by Catholic Education in News

Roxanne Lillis is feeling pretty proud of her efforts, and well she should. The gifted visual arts teacher from Mount Carmel Catholic College Varroville has just been announced as the inaugural winner of the Zart National Teacher-Artist Prize – the first art prize for art teachers in the world.

An amazing response from all over Australia saw 520 teachers enter 760 works for judging. To put that in perspective, the Archibald Prize – the biggest art prize in the country – typically averages 1000 entries each year.

Lillis [pictured in feature image with prize organiser Nic Plowman], whose winning painting Phoenix Rising #3  [pictured below] was inspired by the devastating loss of her home near Mittagong during Christmas bushfires back in 2019, was understandably thrilled by the win, which comes with a $10,000 cash prize and $10,000 worth of art supplies for her school.

Having many years ago studied at Julian Ashton Art School in the Rocks for three years, and then as an undergrad in Creative Arts painting major at Wollongong Uni in 2000, and DipEd in 2001, Lillis has just finished a Masters in painting at University of New South Wales.

While painting is clearly a passion, teaching has dominated her working life for almost two decades.

“Oh, gosh, I absolutely love it. I’ve been a CAPA coordinator for years, but before that for many years I’ve been a visual arts teacher and it’s just a pleasure to get up every morning and go to work – I just love it” — Roxanne Lillis, Mount Carmel Catholic College teacher

However, in the aftermath of the bushfire horror that almost claimed her husband John and completely destroyed her house, it has been her art that has proved critical in rebuilding her mental health.

“For quite a while there it was just my teaching with painting on the side, but since the house has gone, my solace has been painting,” Lillis says.

Her painting was one of the first of a series she painted following the fire. 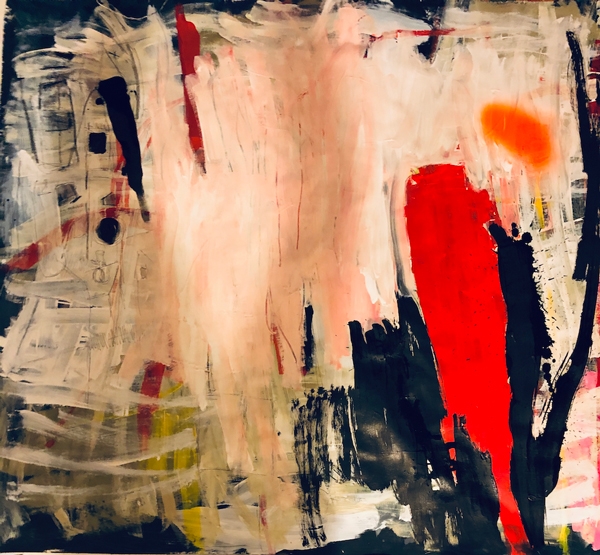 “My relatives took up a collection and said ‘Rox, you need to start painting again’, so I went and bought some materials.

“My son’s mother-in-law sent down a great roll of beautiful prime canvas, and that’s where I started.

"I just attacked the canvas, and painted it all black. It was a sense of attack, but I did feel a certain power behind it." — Roxanne Lillis, Mount Carmel Catholic College teacher and prize winner

“It wasn’t sad, none of that series was meant to be sad – it’s just meant to be happy and hopeful...”

Lillis usually applies several layers in her paintings, and so she says the piece metamorphosised a few times until she was really happy with it.

“It was missing something, the final bit was that little spray of pure orange, and it sort of makes it look a little bit like the aftermath of our land and house.

“It was just meant to be, I don’t know, the human condition, I suppose. Phoenix rising.”

“I was really drawn to this painting. It demonstrates a confident handling of the medium, sitting somewhere between abstraction and landscape. I love the bold use of colour, with that strong red contrasting with the more neutral tones. It’s terrific to see,” Ward continued.

Nic Plowman, Zart education manager and organiser of the competition, was understandably thrilled with the success of its first year.

“We were absolutely delighted with the response to the Prize,” he says.

“The Prize was initiated by Zart to celebrate, encourage and recognise the art practice of Australian school teachers and the support from the art teaching community in its first year, has been truly inspiring. Next year is going to be huge" — Nic Plowman, Zart education manager and organiser of the competition

When asked if she’d recommend other teachers enter next year’s competition, Lillis has no hesitation.

“I really didn’t think I had a chance – I just thought ‘I’m just one artist in many’, so I’d just say have a go," Lillis said.

“I put in three paintings and two were selected. I certainly will be spreading the word, it’s so worthwhile – just do it!”

An exhibition of the NATP winners’ works has been at The Lennox in Richmond, Victoria. To view the exhibition online in 3D (VR) go to: edhq.co/2Qeb2px. Winning entries can also be viewed here: edhq.co/3gldoxn

Originally published in the May 2021 edition of Australian Teacher Magazine.