Starting small was revealed as the secret to large successes at the Mount Carmel Catholic College Varroville’s HSC High Achievers ceremony last Friday, which celebrated the outstanding results of the school’s 2019 Year 12 cohort. Mount Carmel teacher, Victoria Lee, recounted the day – including hosting special guests from the Consulate General of the Republic of Indonesia for the occasion.

Students, Aaron Lillis and Jessica Arentz, were named co-recipients of the 2019 Dux Award – the first time in Mount Carmel’s history that two students have both achieved the school’s highest ATAR for their academic year, with an impressive ATAR result of 98.55.

In addition to attaining an ATAR of 96.80, student, Shequina Pereira, was also recognised for an exceptional achievement – placing first in all NSW-based schools in Indonesian Beginners, and second in the state overall.

The Mount Carmel community was very pleased to welcome several guests from the Information, Social and Cultural Affairs Section of the Consulate General of the Republic of Indonesia, including Consul Hermanus Dimara, Vice-Consul Fahri Mufti and Assistant Michael Zanon, who each applauded Shequina’s result.

President of the Australian Indonesia Association, Neil Smith, said he was also very proud of Shequina and her efforts. He encouraged all students to think broadly about how their studies could benefit Australia.

“You are our future,” he said to the students. “I want everyone here to think of your future – and Indonesia, your neighbour. I hope you can all consider the ways your future can have an impact.”

Shequina, who studied through the NSW School of Languages, said she hoped to use her proficiency in Indonesian to increase the relevance of her tertiary studies in psychology.

“I think people underestimate the extent of what language can be used for. It makes study really transferable and internationally relevant” — Shequina Pereira, student, Mount Carmel Varroville 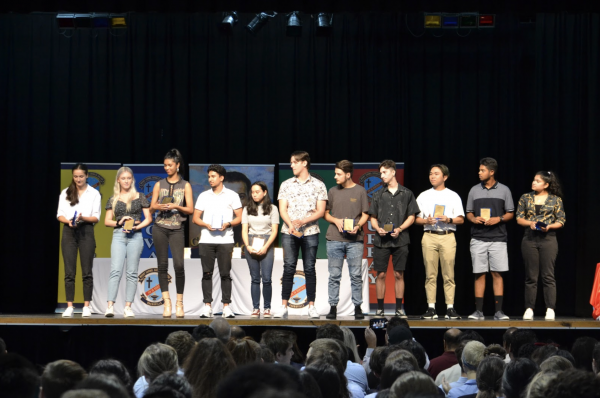 Mount Carmel celebrated 14 HSC High Achievers from the class of 2019, each achieving an ATAR of more than 90. A total of 34 of our Varroville students produced 67 Band 6 results; and across the cohort, a further 237 Band 5 results were attained.

It was a sense of shared responsibility and collegial support that HSC High Achiever and 2019 School Captain, Jessica Arentz [pictured below], identified as crucial to the group’s strong results.

“Resilience and perseverance create a positive outlook that will guarantee success, along with the ability to approach the HSC as a supportive cohort,” she said.

Jessica said she hoped to inspire the new 2020 Year 12 group at a pivotal point in their academic pathway, sharing words of encouragement as they began their final year of secondary education.

“Be diligent about building a sense of unity. Embrace the study sessions. The support network we have here at Mount Carmel is unparalleled,” she said, speaking to the assembled school community last Friday.

“I’ll be honest, I found the HSC incredibly hard. I spent a good portion of it stressed and sleep deprived. But it is the constant repetition of small skills until they eventually become second nature, and being able to apply yourself and endure hardship, that have gotten us to a place where we have the freedom of choice. And I strongly believe education is freedom” — Jessica Arentz, 2019 School Captain and HSC High Achiever, Mount Carmel Varroville 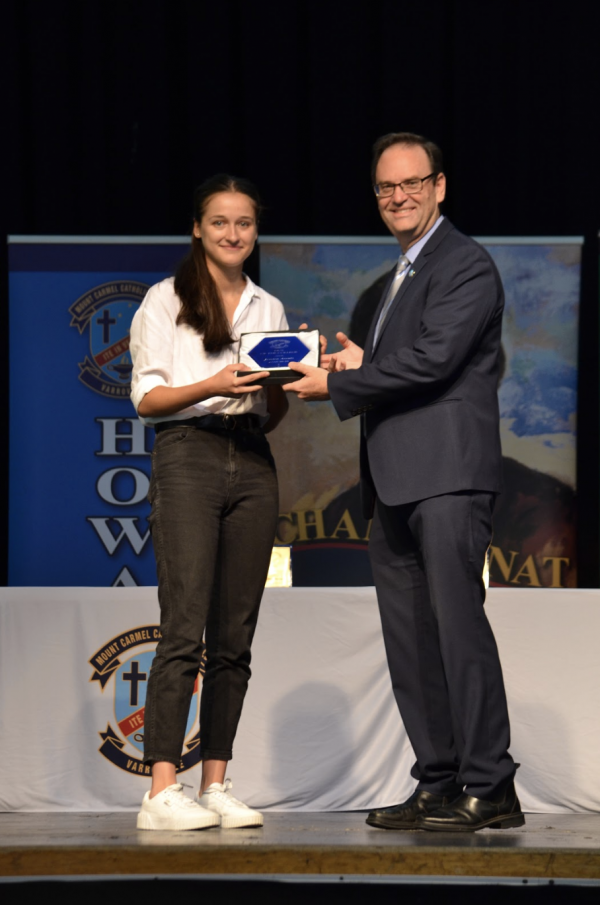 Several other students’ results served as further sources of pride and inspiration for the college – including Abigail Chiwawaya’s major work being selected for the showcase of exemplary NSW HSC visual artworks, ARTEXPRESS, and Joshua Arentz and Riley Brayshaw receiving nominations for the equivalent Design and Technology showcase, Shape.

Mount Carmel Catholic College principal, Steve Lo Cascio, shared his own insights on the link between strong habits and desirable results, congratulating the 2019 high achievers for the decisions they had made to succeed and the effort they had applied to their goals.

“Success is far more than simple natural ability. Natural ability is a start, but effort and hard work are needed to produce success. Success is determined by the goals we set, the efforts we contribute and the habits we form” — Steve Lo Cascio, Principal, Mount Carmel Varroville

As in any community, many individuals play a role in contributing to results worthy of celebration. Mr Lo Cascio thanked Mount Carmel's teachers and support staff for the skills, practices and routines they had passed on to students, and the ongoing “support, encouragement, sacrifice and expectations of parents”, which created environments that contributed to these students’ success.

From business, law, aeronautical engineering and biomedical physics, to media and communications, psychology, physiotherapy and international relations, it’s clear that Mount Carmel’s latest group of alumni have big plans for the future. We wish them well in their future endeavours. 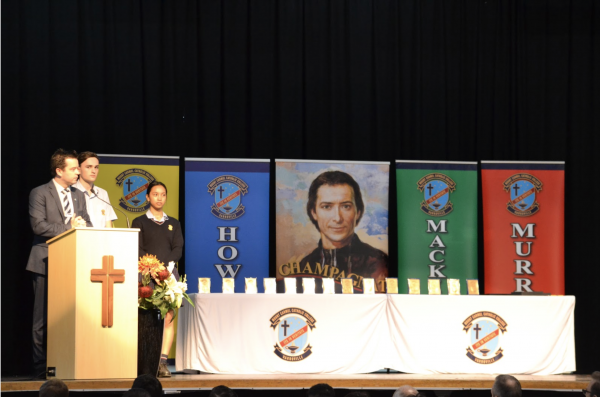