Forget the Scarecrow’s wish: ‘If I only had a brain’! Students at St Joseph’s Albion Park have creatively and cleverly tackled a ‘Wizard of Oz’-inspired challenge at the Tournament of Minds Regional Final, outdoing all other Illawarra and South Coast secondary schools to win the Arts competition and earn their place in the NSW State Final.

The South Coast Regional Final, held at the University of Wollongong earlier this month, saw 14 students from St Joseph’s form two teams to compete with those from other schools across the region in four competitions: The Arts, Language Literature, STEM, and Social Sciences.

The Albion Park Catholic secondary school entered two of the competitions: STEM and The Arts. While the STEM team presented a strong concept of a machine to collect DNA samples from endangered species, they were ultimately unsuccessful in their attempt against tough competition. 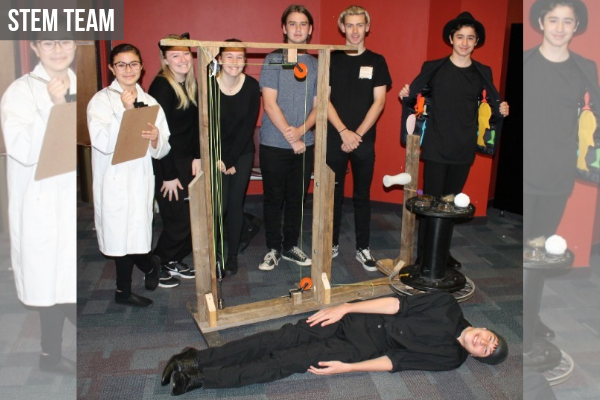 It was the St Joseph's Arts team, made up of a mix of Year 7 and 10 students, who worked incredibly well together to impress the judges. Their highly entertaining and polished response to the challenge using their local suburb, Albion Park, as the context for a new ‘Wizard of Oz’ setup resulted in them taking out the competition.

Congratulations to the following students – members of the successful Joey’s Arts team:

Listen to the students talk about the challenges in their interview with ABC radio here...

How would you do? Here’s the challenge:

‘The Wizard of Oz’ is a story where the characters go in search of things they desire. The Tin Man is searching for a heart, the Lion wants courage, the Scarecrow needs a brain, and Dorothy wants to go home. They come across hurdles such as the Wicked Witch and need to work together as a team to get away.

You will be rewriting ‘The Wizard of Oz’ as if it is set in your state, territory or country. You need to choose where your 'Yellow Brick Road' will start and end, and who your characters will be. What hurdles will your characters come across and how will they overcome them? Your team needs to choose an overarching concept for your presentation – for example, power, faith, resilience, perspective or growth (but not limited to these). Students will use creative backdrops showing the scene of the story, and include justification of the choice of concept to guide the presentation. They will also use at least two original songs that are relevant to the story and explain each character’s chosen desire, the challenges they had to face and overcome, and the reasons for their inclusion.

How the Joey’s Arts team responded:

The team of St Joseph’s students wrote and presented a creative, comedic response to the challenge, where the ‘Wizard of Oz’ characters embarked on a journey to get out of their hometown... of Albion Park! The ‘Yellow Brick Road’ was created with big yellow sponges laid down, as they journeyed to local places including the Albion Park Skate Park and the KFC on the main thoroughfare, and towards the nearby train station. Their trip to salvation was by train, heading northbound on the South Coast Line... but in the end, they were thwarted by the termination of the train at Dapto Station – the illusion of the Yellow Brick Road dashed!

In just 10 minutes of craft, each character’s plight was revealed through a disenchantment with their position in life and perceived lack of future in Albion Park. They were encouraged by the Good Witch and discouraged by the Wicked Witch – their piece embellished with contemporary music from a variety of sources and contexts. Overall, it was the dramatic elements, simple symbolic costuming, clever scripting and song constructions that were the major strengths that won the day for the team.

Yr 10 student and team member, Emma, said the Tournament of Minds challenges such as this one were a “fantastic opportunity” for her and the team to think outside the box and be able to express themselves in a unique environment.

“This opportunity was a new outlet of self-expression and creative thinking, allowing us as a group to work together and bond in a new way. The experience will stay with us for a long time and has encouraged us to confidently think outside the box” — Emma, Year 10 student, St Joseph’s Albion Park

St Joseph’s Acting Creative and Performing Arts Coordinator and facilitator, Danielle Oliver, said the students were encouraged to, in preparation, work in limited bursts of time and with minimal materials to solve both the long-term and spontaneous challenges.

“This preparation has seen our Joey’s students thrive, communicating their ideas succinctly and creatively to resolve problems – often in fantastic radical and unpredictable ways. It is the opportunity to discover the unexpected that makes Tournament of Minds such an enriching and rewarding experience for students” — Danielle Oliver, Acting Creative and Performing Arts Coordinator, St Joseph’s Albion Park

The students thanked Mrs Oliver, Miss Swift, Mr Ie and Mr Lemmon for their support in the preparation of both teams this year.

The win for the St Joseph’s Arts team means they will now travel to the University of NSW in Sydney to compete at the NSW State Final this Sunday, 15 September. They will join the top 83 primary and secondary teams over the four categories of competition from Tournament of Minds Regional Finals across the state, taking on a new 3-hour challenge and spontaneous challenge each.

We wish the St Joseph’s Albion Park team of students an exciting and challenging experience in the Tournament of Minds NSW Final this Sunday!

Congratulations to the Year 4 and 5 students from St Clare’s Narellan Vale who took part in the Tournament of Minds South West Sydney Regional Final – and in a commendable result, received honours in the primary STEM competition!

Held at the University of Western Sydney in Bankstown, the St Clare’s team, ‘The Steminators’, joined hundreds of students from local primary and secondary schools competing on the day  – the largest regional final in the state. Their team of seven completed two challenges – a spontaneous challenge, and a long-term challenge they had worked on for six weeks leading up to the event.

The long-term challenge asked students to design and build a working model of a machine which could be used to extract and store DNA from endangered animals. They also had to create an ICT version of their model and support their design with mathematical thinking and data analysis. 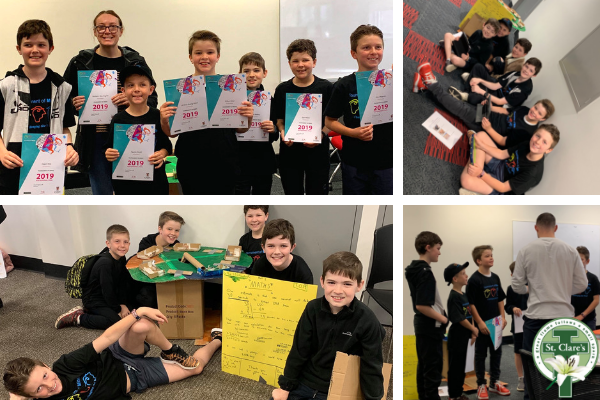