Passion and culinary skills are currently on display, with students from St Clare’s, Narellan Vale now featuring in ‘Foodie School’ – a YouTube cooking series hosted by renowned chef and dad, Peter Sheppard, in partnership with the Campbelltown Catholic Club.

Launched last week, the fun and educational initiative aims to help children and families enjoy the steps involved in food preparation and encourages good eating habits by learning the source and importance of cooking with fresh, quality ingredients.

Foodie School will feature six bite-sized 3-minute episodes, highlighting one family friendly recipe per episode. Filmed to be light and engaging, Mr Sheppard, along with Macarthur school student assistants, prepare meals based on simple yet delicious recipes across breakfast, lunch, dinner and dessert.

St Clare’s were invited by the Campbelltown Catholic Club to join in the unique culinary adventure. Principal, Margaret Foldes, said the students demonstrated wonderful enthusiasm and imagination when participating.

“Foodie School provided a great opportunity to engage and connect with our local community and provide educational and practical content in a really fun way,” Ms Foldes said. “The participating students thoroughly enjoyed the experience and the production crew were impressed with the way they conducted themselves and represented their school.” 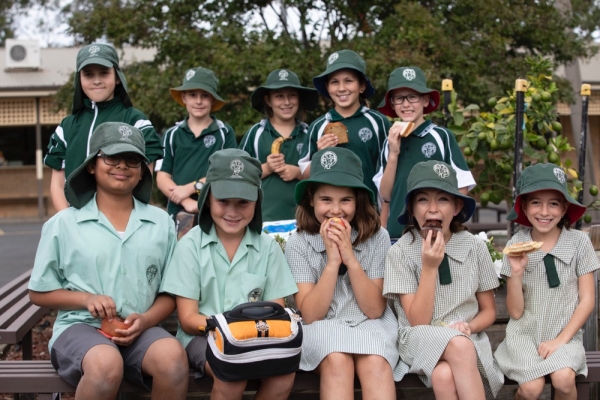 Twelve students from Years 3 and 4 represented St Clare’s participating in a selection process, where Mr Sheppard took them through their paces screen testing part of an episode in a custom built kitchen set up for the series.

Six of these students - Bella-Maria, Eden, William, Etash, Andre and Sienna - were then cast to feature in the YouTube series. Filmed at The Cube, the recipes featured will be made available as special menu items at the club to coincide with each episode, to be released fortnightly.

Speaking enthusiastically about her experience, Bella-Maria said, “Being filmed was like being on a movie, I felt both excitement and nervousness. I learnt that simple things can taste really nice. The best thing was when we got to cook the meal, put it in the oven and then eat it!”

Eden was in resounding agreement with Bella-Maria. “My favourite part of filming was that we were able to eat the food we made, I couldn’t eat it fast enough - it was so delicious.”

Year 4 student, William said, “We made Mexican soup and Mr Sheppard had the nicest [corn] bread to enjoy with it. We put a couple of vegetables into the soup and it was very tasty. My friends are going to watch and like the series on YouTube.”

Year 3 student, Etash said, “I would encourage other children to watch Foodie School and become involved so that they can learn new cooking skills and then share these [skills] with their families.” 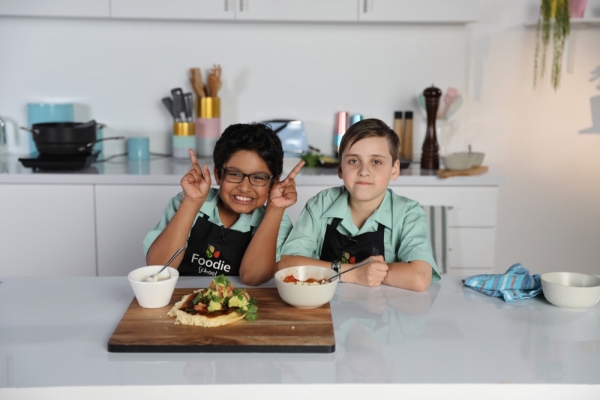 Etash and William with their Mexican vegetable soup

As a winner of many Good Food Guide chef hats, Mr Sheppard (previously of Caveau and MoChi Dining restaurants) is the Director of Food and Beverage at the Campbelltown Catholic Club. Mr Sheppard said that mentoring and nurturing the next generation of foodies is a passion of his, which is at the heart of Foodie School.

“Foodie School inspires kids to learn about ingredients, flavours and cooking techniques, while being creative and bonding with their families. As a dad and chef myself, I see it as an education which is vital at an early age when kids are the most curious and open to learning,” Mr Sheppard said.

“I see that it is our responsibility as chefs is to pass on important life skills and equip the next generation. Whether it’s teaching the importance and source of vegetables, grocery shopping or stirring ingredients - it’s all a part of the process.”

Over the course of the series, recipes made featuring St Clare's students will include: Mexican vegetable soup made by William and Etash, and ham and cheese croissant savoury muffins made by Andre and Sienna.