As an international hockey umpire, Kylie Seymour gets to be close to the action without being the centre of attention - and that’s the way she prefers it. But being awarded the 'Campbelltown Woman of the Year 2018' has put the St Francis Catholic College teacher firmly in the spotlight.

Miss Seymour received the award for her outstanding work and dedication to both education and hockey over a number of years.

As a young girl, Seymour grew up around the local hockey fields, first watching her father play, and playing herself from age nine, for Raby Hockey Club. She then took up umpiring as a teenager.

“When I was about 14, I was invited along to an umpiring clinic to get to know the rules. It was attractive at the time because I knew getting to know the rules would make me a better player and I would earn five dollars a game!,” she said.

“It ended up being something I was quite good at and I haven’t really looked back since.”

Hard work and talent with the whistle saw Seymour rise through hockey’s ranks to umpire at a national level and from 2010, an international level, at events including the Hockey Champions Trophy in London & Argentina, the 2014 Commonwealth Games in Glasgow and the 2016 Olympic Games in Rio de Janeiro.

Last year, she also received the prestigious award of Official of the Year at the NSW Sports Awards.

The Year 1 teacher and Junior Years Leader of Learning was presented with her Woman of the Year award from Greg Warren MP at a recent St Francis school assembly. The Campbelltown State Member of Parliament praised her generous commitment and contribution to the region’s sporting and education sectors.

“Kylie is a shining example of the many wonderful women in our community," Mr Warren said, "It is important that we remember the officials who make the running of all sporting codes possible and recognise their achievements." 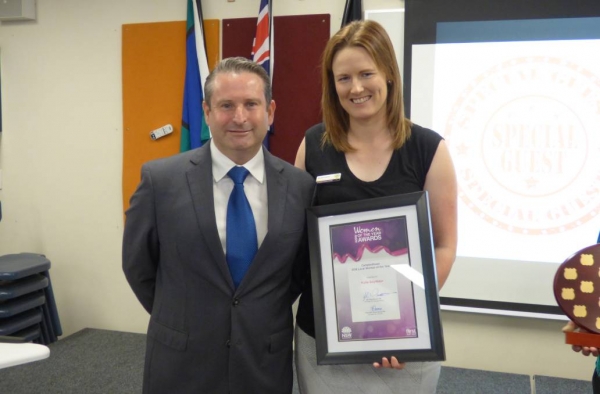 Miss Seymour said she loved making a difference and felt “very honoured” to receive the award.

“I believe I received it on behalf of the women in Campbelltown that give so much to the community,” she said.

“Working to serve others is what I get the most out of in life, and I have always loved working with children - from playing with my cousins to coaching young hockey teams. I knew I wanted to be a teacher from a young age.

“The teaching and umpiring worlds are so different, yet so similar. When you strip the two back, they are both very people-oriented and about the service of people. They are worlds that are defined by relationships and where, if you work hard to establish respect and rapport, you gain the trust and credibility to enter people’s lives to make a difference.

“The set of skills I develop in one area continuously assists me to be a better practitioner in the other area, and vice versa. And through various experiences in both, my confidence levels and self-belief have developed over the years.”

Now retired from international umpiring, Seymour said the award was a timely opportunity to thank the people who had supported her and allowed her to accomplish all she has in the past several years.

“I could not have gotten to where I am without the constant love and support of my beautiful family and friends,” she said.

“I am also very grateful for the support I received from Michelle Rolfe, Principal of my last school Our Lady Help of Christians, Rosemeadow and Simon Abernethy, Principal of St Francis Catholic College, Edmondson Park  and for their patience and guidance. The teacher, student and parent bodies of both schools have also been unbelievably supportive of all that I have set out to achieve.”