Posted 9 May 2018 by Catholic Education in News

The park has been more than 12 months in the making, with Council engaging in a major community consultation process that saw almost 20,000 people share their suggestions for the area, including via workshops with schools.

Feedback from children was a strong feature of the process, with the end result being largely designed by them - including those in Years 3-6 at Stella Maris Catholic Parish Primary School, Shellharbour. Principal, Danny Sykes, said the students had greatly enjoyed being a part of the consultation and contributing their ideas, especially as they frequently use Little Park and the surrounds.

“We are fortunate to have great facilities as well as beautiful natural surroundings right on our doorstep,” he said, “This was a wonderful opportunity for the school to be involved with the local community, as well as providing our current students with the opportunity to create something which will be enjoyed by thousands of families in the years to come.”

Stella Maris students like Sibeal, agreed: “I liked being involved, because we can say to our families that we had a role in the planning of the playground we use,” she said.

“We got to suggest different materials such as softfall [instead of bark] and new equipment such as a roundabout be introduced,” Ella explained. “There is more variety of equipment, so it caters for children of all ages and children won’t get bored,” Elizabeth added.

Aleisha’s pick of equipment was the flying fox: “It’s exciting when you go fast!” the Stella Maris student exclaimed. Bree thought the tree house was best, “because it incorporates an existing natural feature with new equipment,” - a sentiment that strongly featured in the consultation process. 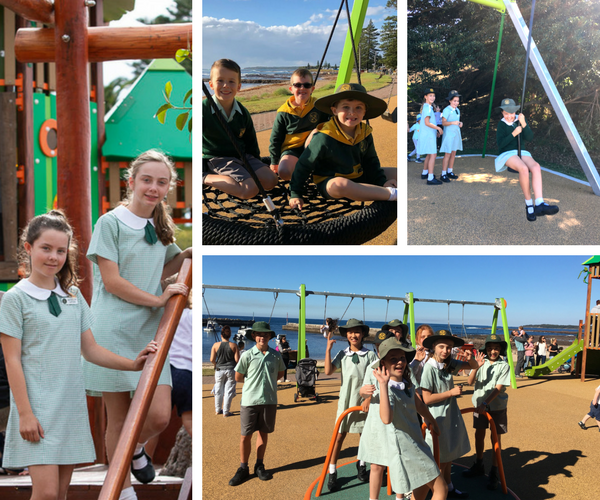 Students from Corpus Christi Catholic High School, Oak Flats played a critical role in the process too - a team of 115 students from the following classes worked together to gather student feedback, participate in design and budgeting workshops and then use technology to visually bring their concept to life:

A group of Corpus Christi teachers including Samantha Cockcroft supervised the group collaboration, saying it was an “incredible” experience that had a lot of positive feedback from the students and showcased the dedication of those involved.

“Each of the involved groups had their own 'area of expertise' to help contribute to the project, as well as their insight as young people of the community. The students all felt valued as members of the community, especially when young people often think that they don't get much of a say in what happens in the world around them. There was much excitement about the park being built and they couldn't wait to see which of their ideas would be used in the final projects,” she said.

“Corpus Christi aspires to offer as many different ways for students to be involved in more than just the academic life of the school. We’ve found that seeking out and providing opportunities for our students to become more involved in their community has only contributed positively to their resilience levels, their outlook on life and their ability to transfer external experiences to better their academic lives.” 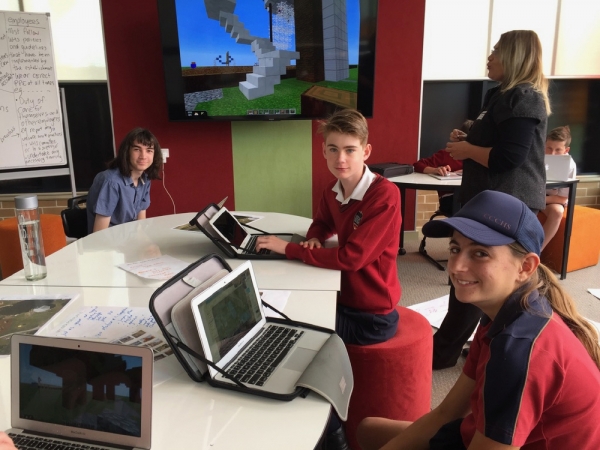 Corpus Christi students who contributed to the design, including senior, Tiana, said, they were honoured to be part of the focus group for the park: “[In Child Studies] we were able to see the types of things kids loved to do and play with through our theory studies, as well as through participation in our school's playgroup. This helped us to contribute things we knew kids would love - many of which we can see in the park today.”

“It was a really fun and creative experience to be a part of, I was able to use my knowledge to construct possible plans for what the park would look like,” Year 12 student, Lily added.

“I loved being a part of this experience,” Year 9 Minecraft group member, Charlotte, beamed, “It made me feel much more involved in the community than ever before. I and everyone else who worked on this project worked very hard to make the park fun and accessible for everyone, including those with disabilities and people in wheelchairs. I'm glad that our themes were implemented in one way or another.” 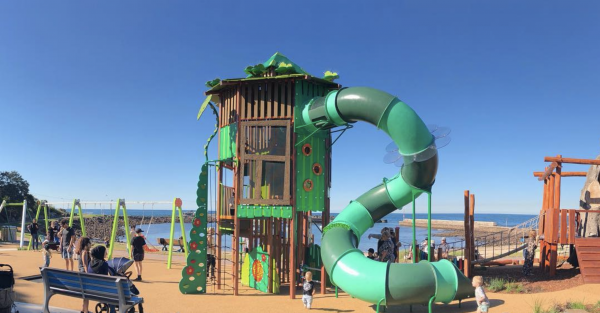 “The end result of this partnership between our community and your Council is this wonderful facility. What a great outcome!” she said, “I must say a huge thank you to all students who contributed their ideas and suggestions.”

“This beautiful new park [is] a fantastic addition for Shellharbour and will be well used, I’m sure. I’m thrilled to officially open the Little Park playground and I know it will bring the community many years of fun and enjoyment.”