Posted 22 May 2018 by Catholic Education in News

The Stella Maris, Shellharbour school community is celebrating their 60th Anniversary with week-long plans, including the involvement of past and present students, staff, parents, and invited special guests.

Their first event was held on Sunday 20 May (Pentecost Sunday), with over 200 attendees gathered at All Saints Church for an Anniversary Mass, followed by a special lunch at Stella Maris, Shellharbour. Many current students attended, joining ex-students, showing their  school spirit in celebrating as a community. Students were highly involved in the fun-filled events, showing officials (including past Principals and the Mayor of Shellharbour) around their school and performing a dance to songs from the fifties.

Marianne Saliba, the Mayor of Shellharharbour, attended Stella Maris from 1970 to 1972. Her four children also attended from Kindergarten to Year 6. “I have had many years association with Stella Maris and I am proud of the school’s record in educating the children of Shellharbour City. I would like to congratulate Stella Maris on reaching this milestone,” she said.

Celebrations concluded in the afternoon - with a highlight - the burial of a time capsule, to be opened on the school's 100th anniversary in 2058. After the items were placed in the time capsule, student, staff and parent representatives helped to seal and bury it in the school garden. 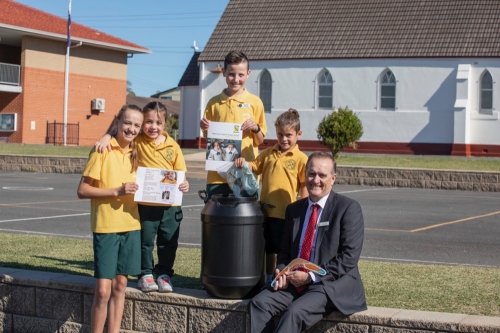 See Andrew and Amali, the Stella Maris School Captains, talk about their time capsule below:

Celebrations continued into the following week, with a 1958 staff and student fancy dress day - including playing traditional games such as marbles, jacks, elastics and hopscotch - and a Foundation Day Liturgy, where Year 2 students re-enacted the story of the Sisters of Charity in establishing the school. Mary Aikenhead Awards (the founder of the Sisters of Charity) were also awarded to students who regularly display acts of charity and kindness towards others.

Principal, Danny Sykes, said he is very proud of the 60th anniversary celebrations, “I was particularly pleased that 14 of the original 46 students were able to attend and it was a chance for people to renew old friendships and to share stories from their time at Stella Maris.”

“I believe it is important to celebrate our 60th anniversary, to not only acknowledge the wonderful work of the Sisters of Charity in establishing the school but to also provide our current school community with an understanding of the history of Stella Maris and an appreciation of the tireless efforts of staff and parents in working together to make the school what it is today, a faith-filled, vibrant community of learners,” Mr Sykes said.

Stella Maris has an interesting history, after Shellharbour Parish was formed in 1953, Father Smyth sought permission to commence a Catholic School. In 1958, Bishop McCabe of Wollongong approached the Superior General of the Sisters of Charity and the Sisters came to Shellharbour to open a new school. Father Ekerick, appointed Parish Priest on the death of Father Smyth, opened Stella Maris School as a memorial to Father Smyth, in May 1958.

When the school began there were two sisters on the staff and forty six students from kindergarten to fourth grade. The first principal was Sister Regina Munce. School enrolments grew to 200 in 1961, with the introduction of a bus that brought children from Warilla. In 1961, the Mother's Club was formed and their main work was fundraising for the development of the school playground and maintaining the upkeep of the school and its facilities.

Seven Sisters of Charity have guided Stella Maris in faith, hope and love as educational leaders since the school's foundation. Sr Mills, who retired in 2009 (and attended the 60th anniversary celebrations) was the last Sister of Charity Principal in all of Australia. Today Stella Maris has one Sister of Charity living and working in the Parish, Sr Kerry.

Stella Maris currently has an enrollment of 374 students and 30 staff members.

Congratulations to everyone who made the celebrations so memorable. We hope to cover the opening of the time capsule – 40 years in the future!