The recent bushfires have had a devastating impact on our local communities – including on our native wildlife and their habitats. The students and staff at Holy Family Ingleburn have been keen to do their bit to support the recovery efforts, answering Pope Francis’ call to “hear both the cry of the earth and the cry of the poor”.

Media coverage of this unprecedented emergency has shown a terrible loss of homes, livelihoods and tragically, lives. The widespread deprivation caused by these fires has extended to a devastating loss of our koala population, including thousands of hectares of key koala habitat now also destroyed. Surviving animals will face significant challenges from food and water shortages and lack of habitat for an extended time, triggering a recovery process that could take decades.

Read the story of Odin the koala, spotted during search and rescue operations in the Wollemi National Park.

The ‘Koala Campaign’ has been an annual conservation effort at Holy Family Ingleburn for the past four years, driven by Year 2 with their Religious Education focus on 'Creation' and HSIE topic 'My Place in Space', which both look at the local area and conservation issues.

But Year 2 teacher and campaign organiser, Trish Coffey, said this year’s efforts have taken on a whole new relevancy and sense of urgency – leading to a surge in this year’s donations and efforts. “The kids are so involved every year, but this year, it has been particularly pertinent with the bushfires,” she said.

“The plight of the koalas and all affected by these dreadful bushfires has united our school community at Holy Family Ingleburn, and prompted many to become personally involved and take further action as a result of our Koala Campaign initiative” — Trish Coffey, teacher, Holy Family Ingleburn 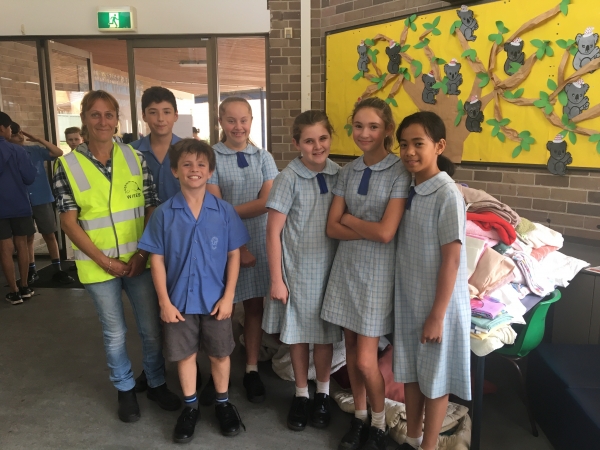 The whole-school effort to help the local koala population has seen a fantastic donation drive of piles of blankets, towels, pillows and pillowcases now go to the local Wildlife Information Rescue and Education Service (WIRES) group to protect and support rescued wildlife.

The donations were collected last week by grateful WIRES volunteers [pictured above]. The Year 6 children – the first class to run the Koala Campaign at Holy Family back in Year 2 – helped load them into the cars.

Students like Jameela and Angelina and their families have even taken steps to ‘adopt a koala’ online, providing donations to support their chosen injured koala's ongoing treatment and care.

Holy Family staff were also quick to join the action, holding a special Christmas lunch to raise additional funds for the cause. Their contributions at the lunch, including a filled wildlife donation box and donated items for a raffle, raised over $500 for the Vinnies NSW Bushfire Appeal and the Clarence River Valley WIRES group.

“Every second year, we as a staff do a charity-based giving. We thought with the ongoing devastation from the fires that a donation for the humans and animals affected would be very timely. All the staff were very supportive and even the local Darrell Lea factory donated a raffle prize” — Kathryn Jones, campaign organiser, Holy Family Ingleburn 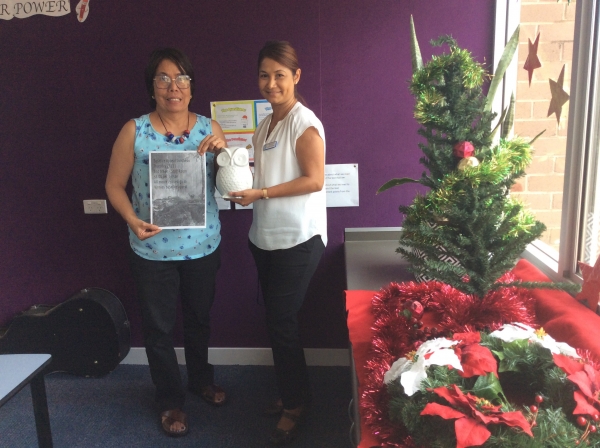 As the Holy Family Wollongong Environment Network (WEN) school contacts, Trish Coffey and Kathryn Jones have been instrumental in leading this campaign and many of the school’s other environmental initiatives.

“Trish and I formed a connection early on at school and have worked together for the past six years. Trish has always been proactive in promoting our environment and always makes sure her students have the opportunity to learn about the environment and sustainability. It wasn't long after Trish became aware about my local involvement with WIRES that we started the koala information talks at the school. These talks tie in well, as the koala colony in Campbelltown and surrounding areas is the healthiest in the state,” Ms Jones explained.

“On the flip side, our area has been inundated with development so many koalas have lost their homes – the students learn about this as a local community issue. The talks have been led by local WIRES members who are koala carers, volunteering their time to help rehabilitate native wildlife and release them back into the wild once they’re ready. In more recent years, I do the presentation and each child is given a WIRES colouring pack.”

Ms Coffey affirmed it's "wonderful" to have Kathryn as a volunteer for WIRES at the school. "She engages the students and shares her knowledge, talking about the work of the service in our area," she said.

"My Year 2 students love learning about koalas, and have even made it a focus topic of their information report writing. They’ve developed a keen sense of why it is important to help koalas and native wildlife, and take action by supporting WIRES through the school’s Koala Campaign."

What the Year 2 students said:

“WIRES is making little pouches for the koalas out of the blankets, pillow cases and soft towels that we are bringing in for the Koala Campaign” — Max

"We keep koalas safe, warm and protected because koalas are God's creation" — Jayden

“I learned that ‘koala’ is an Aboriginal word that means ‘no drink’. Koalas eat gum leaves to get their water” — Paige

Mrs Coffey said the campaign has “given everyone a real sense of our responsibility to be stewards of God's creation and highlighted Pope Francis' message for action, detailed in his encyclical, Laudato Si'”.

“Each year we are overwhelmed with the donations of towels and blankets for use by the WIRES carers, but even more so this year – it’s been wonderful support” Ms Jones added. 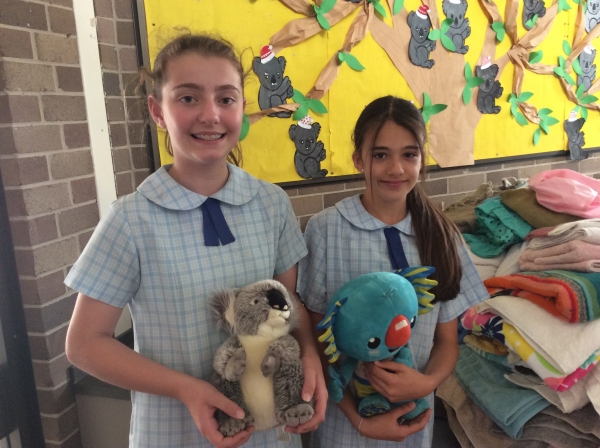 The annual Koala Campaign at Holy Family is part of a larger ongoing school community effort to help local koalas and other wildlife.

In partnership with Campbelltown City Council, students and staff recently planted over 130 new native plant seedlings in two new garden spaces in the school to help create protected food sources and safe breeding environments for birdlife. The project involved installing two bird boxes in the new garden areas – one with a camera to monitor the native birds in the area and send data to the UWS.

In addition, a council representative visits the school to talk to students about being ‘water wise’ [pictured below] – a timely presentation with the current drought conditions and water restrictions in place.

The school community also participates in the ‘Hollows as Homes’ project, further helping provide habitats for koalas and native wildlife in the local area.

“It’s great to see the children take on what they’re learning about the environment and the living things around them, and carry that with them in their thoughts and actions. Some of our students are definitely wildlife warriors in the making!” Ms Coffey said. 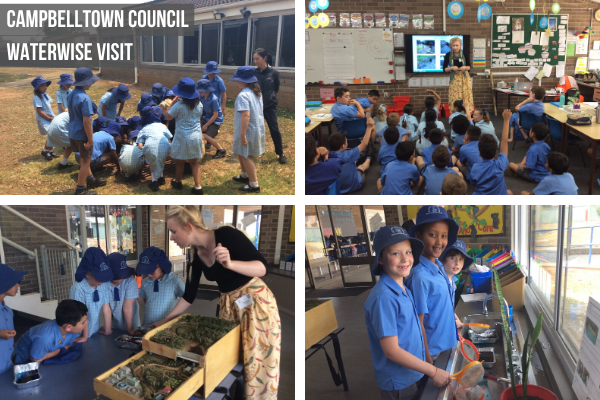 For more information about the work of WIRES, visit www.wires.org.au. To donate to the Vinnies NSW Bushfire Appeal, visit donate.vinnies.org.au/appeals-nsw/vinnies-nsw-bushfire-appeal-nsw