The students used the morning of Friday 1 March - Clean Up Australia’s ‘Youth and Schools Clean Up Day’ - to help rid the Little Lake surrounds of litter, recreational fishing debris and some other surprising items detracting from the natural beauty of the area and endangering local bird and marine life.

“We found a large variety of rubbish - big items such as rubber tyres and clumped fishing gear; and smaller items such as soft plastics and paper bags,” Year 10 student, Michael said. “I enjoyed the fact that I was able to clean up my local environment.”

The haul collected from the students’ efforts over a few hours included: 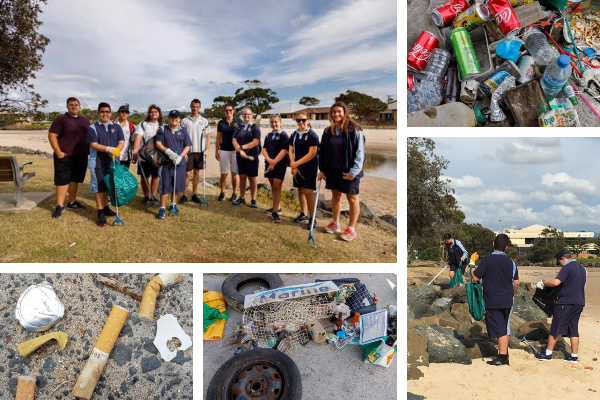 As the Illawarra Mercury reported, the students swapped their books and pens for garbage bags and pickers in an effort to not only clean up but also reduce the amount of waste going to landfill. They were able to sort through the rubbish and dispose of one bag each to redcycle, recycle and Shellharbour City Council’s FOGO service.

Year 8 student and WoW club member, Jasmine, who was recently awarded the Shellharbour Young Citizen of the Year 2019 with her sister, Sienna for their commitment to the environment and waste minimisation through the Two Week Red Bin Challenge group, helped organise the local event.

"It is important for young people to know where their rubbish ends up if they don't put it into the bin. It doesn't always go into landfill. Rubbish can end up in the ocean where fish have to live with our litter” – Jasmine, St Joseph’s Albion Park student

"Most of the students were surprised with how much rubbish there was near the lake and in the rocks. The most common items were cigarette butts, glass, beer caps, soft plastics like chip packets and water bottles, as well as lots of small unrecognisable pieces of plastic." 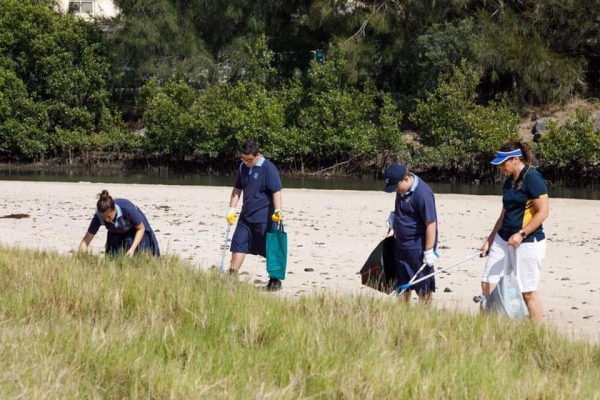 St Joseph’s Albion Park WEN co-ordinator and WoW Club co-founder, Natalie Behl, said the students dived straight into the task on the day, collecting as much rubbish as they could to prevent it from ending up in the ocean.

“The students that participated couldn’t believe what and how much we collected. Although we had to put most of the large hessian bags of rubbish we collected into landfill, it didn't end up in the stomach of a fish, bird or turtle,” she said.

“It was a lovely morning spent helping our environment, and as we collected rubbish, there was lots of talk about how we can better educate the whole school community with waste management.

“I am so proud of this group of students we have here at Joey's that turn up to our meetings every fortnight and help out where they can. They are so passionate and so enthusiastic” – St Joseph’s Albion Park WEN Co-ordinator, Natalie Behl

“Not only was it great to be part of something such as this, but it was also nice to reward the WoW Club students with an excursion that was all things environmental.”

The group is currently preparing a presentation for their whole-school assembly next Monday to inform the rest of the student body about the gravity of the issue of waste, even in their very own corner of the world. They’ll share their experience at Little Lake last Friday to remind students how they can all help contribute to protecting our local environment with simple habits and informed daily decisions around ‘reducing, reusing and recycling’. 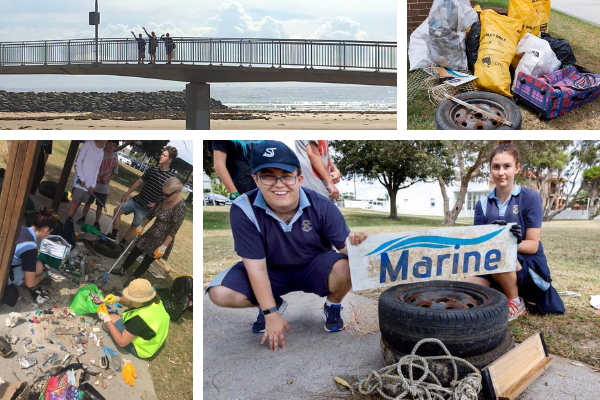 Organisers from the two Shellharbour community environment groups were quick to praise St Joseph’s for their involvement in the event and the students’ dedication to the cause.

“Our schools did something awesome for our local environment as part of this offsite location for Schools Clean Up Australia Day... and the students loved it! We’re looking forward to making this even bigger next year, with more schools to get involved!” said Ginger Rogers from the Two Week Red Bin Challenge.

Oceans in Focus Director of Education, Christine Bernasconi, also expressed her gratitude to the students involved: “It was a fantastic day, attended by such passionate, environmentally-aware students. Thank you to all the students who participated, it was a wonderful event to be a part of.”

For the St Joseph’s WoW Club, it doesn’t take a special day on the calendar to be pursuing such environmental initiatives. The school is proactive in, as Pope Francis describes it, ‘caring for our common home’ - raising the bar on their sustainable environmental practices wherever they see an opportunity and working hard to further awareness about waste all year round.

This has included through implementing an enhanced multi-bin waste management system across the school and engaging in community partnerships such as the Vinnies ‘Return & Earn’ scheme.

“This year, St Joseph’s is continuing its efforts to minimise contaminations in our bin pods. To add to our efforts, we want to implement terracycling for all office supplies - yet another thing that, at the moment, often ends up in landfill when it doesn’t have to. We are also rolling out our yellow mixed recyclable bins to all classrooms” – St Joseph’s Albion Park WEN Co-ordinator, Natalie Behl

Later this month at the school’s cross country carnival, the team is working with Green Caffeen to supply 100 of eco-friendly coffee cup company’s products for the competitors to use when they are out on the course - meaning the school will significantly reduce their reliance on single-use cups on the day.

The WoW Club said they hoped their efforts would encourage others to dispose of their waste correctly - not just for an annual Clean Up Australia event, but every day: "Rather than just picking up rubbish for one day, help the environment and pick it up every time you see it.”

For more information on CEDoW’s Wollongong Environment Network (WEN) and the environmental initiatives occurring in our schools, visit our WEN page.