As a baby, Courtney Schonell chose to hold a hockey stick over a dummy. At age four, she picked up that stick to play. Six years later, she made her first national hockey team. Now, at 17 years old, Courtney is enjoying international success and on track for the 2018 Youth Olympics.

Not only was Courtney recently awarded the 2017 NSW Combined Catholic Colleges Blue Award for the highest-achieving girl in hockey, she is also being celebrated as the NSWCCC Vince Villa award recipient, for the most outstanding female athlete across all sports.

The St Benedict’s College, Oran Park student has represented the NSWCCC and NSW All Schools hockey teams for the past three years, including as captain of both last year. Her outstanding performances also resulted in her selection in the Australian Schools team in 2016 and 2017, again, as captain in 2017.

Her robust performances during the Australian School Team’s tour of South Africa in 2016 were of particular note, where she was the highest goal scorer and named the ‘Player of the Tournament’, as well being voted by her team as ‘Players’ Best and Fairest’.

In 2017 Courtney represented NSWCCC in the Opens Team at the Tri Series Tournament. Her consistent, dominant play was one the driving forces behind her team winning the gold medal, and her being selected in the Open Merit All Schools Team.

Courtney’s commitment to hockey and Catholic school sport is evident: as well as her excellence and leadership at all levels of the representative school sport, she has also umpired at NSW All Schools Tri Series Hockey Tournament and given her time to coaching younger teams.

“I feel proud of what I have achieved. Being named the Vince Villa and Blues Award recipient has made me feel honoured and grateful for this highly important recognition,” Courtney said.

“Hockey is something I have a passion for. I love playing it and watching it. I love it more and more everyday.

“My key to success is to work hard, take any criticism as feedback, be determined to improve and to stay focused.” 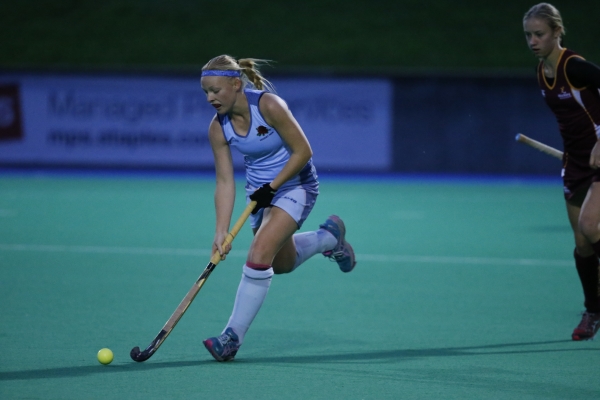 On the night of the Blues Award, guests including CEDoW Director of Schools, Peter Turner and other Diocesan Directors, school principals from across the state, NSWCCC conveners and Diocesan sporting representatives were told of Courtney’s success on the hockey field, and as a sportswoman:

“Courtney shows leadership whenever she competes. Her speed, ability to read and control the game, mixed with her strong passing game, created plenty of opportunities and goals in all these teams.

“In defence she demonstrates effective communication skills, outstanding agility and knowledge of the game. Her presence within the team provided confidence to the girls around her.

“Her achievements as an elite sportswoman reflect her determination. She has displayed superb organisational skills and a disciplined approach to time management. She has strength of character and commitment to her beliefs.  Courtney is a determined young woman always strives to reach her full potential.

The Year 12 student is currently completing her Higher School Certificate while juggling the pressures of her international sporting commitments. She currently holds a NSW Institute of Sport Scholarship and has been named in the Australian Future Athletes program.

This month, Courtney will travel to Papua New Guinea to compete for Australia in the qualifier games for the Youth Olympics 2018. She considers being selected for this team her biggest achievement to date.

“My advice for others would be strive towards your dreams,” she said, “If you put your mind to it, anything is possible. The sky is the limit - any setbacks or mistakes can be fixed through determination and fight.”