Amy was recognised as the most outstanding female athlete across all sports for 2019. Amy represented NSWCCC and NSW All Schools Netball for the past three years. Her outstanding performances resulted in her selection in the Australian Schools Netball team. Amy has also been selected in the Australian Schools AFL team, highlighting her versatility and athletic prowess. Amy was a worthy recipient of this most prestigious award and responded with some inspiring words on behalf of all athletes.

The evening included the presentation of awards and recognition of the top students in all sports from NSW Catholic Secondary Schools and Colleges. The sporting achievements of over 55 students were recognised, with six students from the Wollongong Diocese being acknowledged.

The two highest achieving boys and girls from each sport are judged by the NSWCCC Blues committee taking into account their 2019 achievements, which often involves NSWCCC, NSW All Schools and Australian representation. The Blues Awards is the culmination of a busy year and is a great advertisement for the sporting pathways available to students in Wollongong Diocesan Schools.

Guest speaker on the evening was Australian Paralympic swimmer Tim Hodge, a past student of Patrician Brothers, Blacktown. Tim has competed in the Rio 2016 Olympics, the Commonwealth Games and the World Para-Swimming Championships in London. He currently holds 56 Australian Age and Open records in the S9 and SB8 categories.

Tim provided some strong messages to our athletes and parents showing the importance of setting goals, working hard and the need to enjoy your sporting experiences.

St Mary’s Star of the Sea College, Wollongong hosted the event with many students and staff contributing to the success of the evening.

The NSWCCC Blues Awards are a great advertisement for the sporting talent and pathways we have in our schools. We congratulate our Wollongong students on their fine achievements. 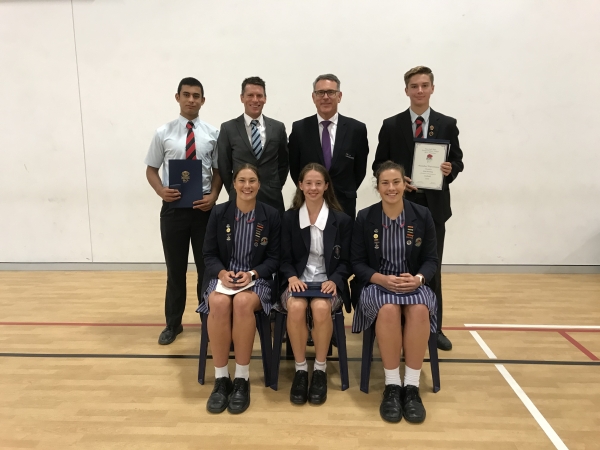