After a most distinguished 39-year career as a Catholic educator and leader, Mary Immaculate Catholic Parish Primary School, Eagle Vale’s Don Spencer has enjoyed his last day as principal, retiring from his position last Friday, 13 September 2019.

The Mary Immaculate and broader CEDoW community acknowledged Don’s retirement at a celebratory mass and morning tea at Eagle Vale last Wednesday. Staff and students also surprised him with a special whole-school presentation assembly, where each grade presented an item to thank their beloved principal.

There were speeches, jokes, dancing and singing, followed by an Irish blessing and a guard of honour formed by all the students, leading Don through the school to much cheering, applause and many a high-five with students along the way [see photo gallery from the day here].

Listen to Mary Immaculate students reflect on their memories of Mr Spencer and send him a special message for his retirement...

Don said he was “very humbled” by everyone’s presence on the day and all the time, work, and planning that had gone into the celebrations. He particularly thanked those present for sharing in the Eucharistic celebration with him. “As a teacher in a Catholic school, I can’t think of a better or more appropriate way to share with our community and friends, my last day here at Mary Immaculate,” he said.

“Schools and the education system have changed dramatically over the past 39 years, but the one constant that has made the journey so interesting and rewarding has been the children. It’s been the challenge of meeting our children’s needs and supporting them in their learning, enjoying the classroom and playground banter with them, and witnessing their accomplishments, that has kept me in this vocation” — Don Spencer, retiring principal, Mary Immaculate Eagle Vale

Don told those gathered he’d had the sincere privilege of teaching in nine Catholic schools, and four in the role of principal – in that time, having directly taught over 1,300 students and read some 5,800 first draft student reports. 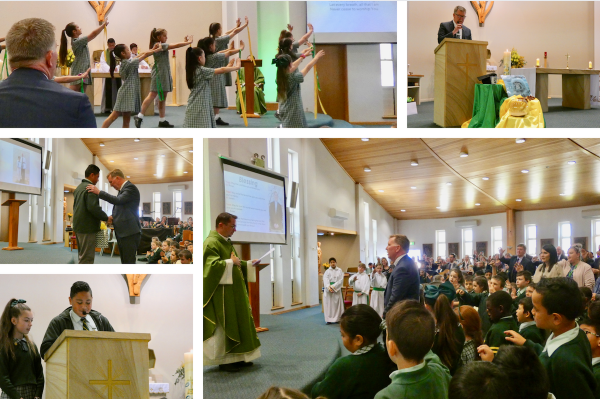 “I take this opportunity to thank everyone who has been part of my education journey. I feel most privileged to have been part of the Catholic education system. I thank the Mary Immaculate school and parish community for your support and friendship over the past seven and a half years. I am very proud of my achievements, but more importantly I am proud of the standing our school, Mary Immaculate, has within the community. Our school is blessed to have a very committed, friendly and supportive staff, who I appreciate very much,” Don said.

“The enormity of retiring is really starting to sink in. I am certainly going to miss all the wonderful people who have made my teaching career so enjoyable. To the hundreds of children I have taught throughout my career – and especially the children of our great school – seeing your smiles and your love and exuberance for life, has made teaching and leading a school so rewarding” — Don Spencer, retiring principal, Mary Immaculate Eagle Vale 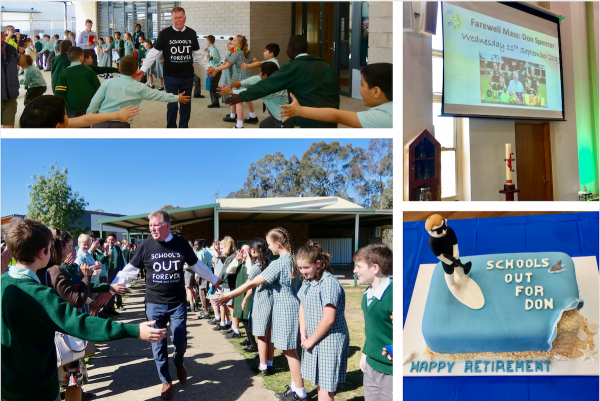 A heartwarming highlight of the celebrations was the students sharing their thoughts and memories of Don as their principal. The students lined up to reflect on times they recalled fondly, giggle at shared moments of fun and laughter, and thank “Mr Spencer” for his many acts of kindness, encouragement and generosity.

Memories of Mr Spencer – what the students said:

“I remember when Mr Spencer came to Book Week dressed as Sponge Bob Square pants one year and this year he was Superman. He is very funny for a principal” — Olivia

“I remember all the years I’ve walked past Mr Spencer, he’s called my oldest brother ‘Big Barnsey’, my sister ‘Middle Barnsey’ and me Little Barnsey’. I will never forget this” — Rebecca

“I remember when we went on our Year 5 camp, I couldn’t hit the target with an arrow, so Mr Spencer came and helped me with the bow and I got a bullseye” — Diva

“I remember when Mr Spencer came into my Year 4 classroom and was talking to us. When he went to look at his paper he said ‘I’ve got to find my glasses’. Then someone said ‘Mr Spencer your glasses are on your head’. We all had a good laugh” — Amyeliah

“I remember when Mr Spencer cheered me on at this year's footy gala day. His encouragement helped me score a try while representing our school” — Aidan

“I remember when I first met you in your office, Mr Spencer. I was very shy back then and you helped me to become more confident. Thank you for being considerate throughout the years. You helped me so much. I will always cherish your kindness. Please use your time with your loved ones in your retirement. Thank you Mr Spencer, and have a wonderful time relaxing” — Cassandra 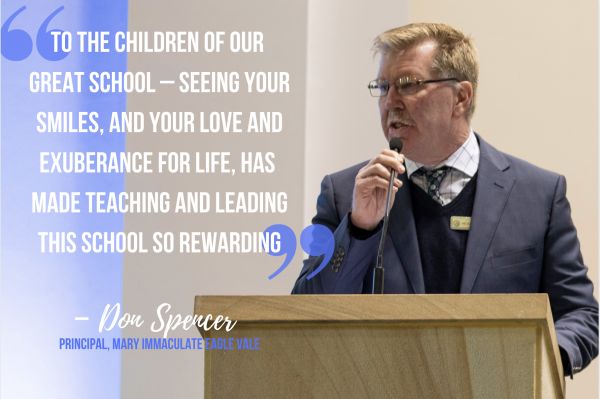 As a 21 year old young man, Don commenced his teaching career in the Archdiocese of Sydney at Our Lady of Mt Carmel in Mt Pritchard, before starting as a teacher in the Diocese of Wollongong at St Thomas More Ruse in 1987, then Our Lady Help of Christians Rosemeadow in 1992. He soon moved into school leadership roles and was appointed Acting Assistant Principal in 1994 at St John's Campbelltown.

The following year, Don was appointed to the position of Assistant Principal at St Clare’s Narellan Vale – a position he held for eleven years. He then returned to Ruse in 2006 for his first principal appointment and has been Principal at Mary Immaculate since 2012.

CEDoW Director of Schools, Peter Turner, acknowledged Don’s dedicated service as a leader in the Diocese of Wollongong and his fine principalship at both St Thomas More Ruse and Mary Immaculate Eagle Vale.

“Don has always been a highly visible and deeply dedicated educator and his leadership of the Catholic life and culture of the school community has been inspired by his own witnessing to his faith. His compassion, empathy and respect for human dignity in responding to the needs of the community are also an integral part of his beliefs and character and have shone through in his leadership at both St Thomas More and Mary Immaculate primary schools” — Peter Turner, CEDoW Director of Schools 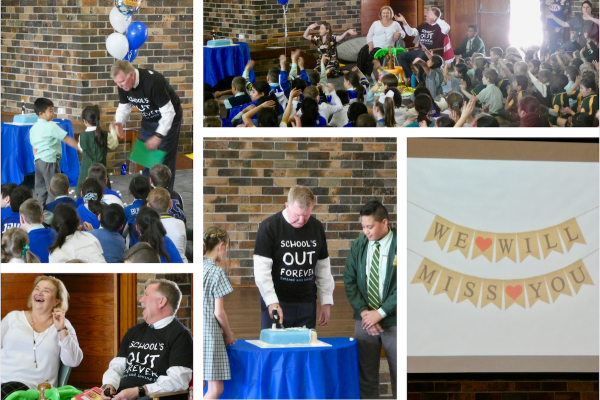 Don was instrumental in the development of the resources and facilities at both St Thomas More and Mary Immaculate, and has steadfastly collaborated with the community and building professionals to create contemporary learning environments and surrounds that best meet the needs of students and staff.

“Don has also been committed to the development of the prayer and liturgical life of the schools he has led. His positive and respectful relationship with the parishes has been a hallmark of his fidelity to Catholic education,” Mr Turner said.

“I am sincerely grateful for Don’s faith-filled passion and unwavering commitment to student learning, wellbeing and growth within the Catholic tradition, and for his collegial contributions to the system of Catholic schools in the Diocese of Wollongong. I take this opportunity to congratulate him on his outstanding career and his professional achievements” — Peter Turner, CEDoW Director of Schools 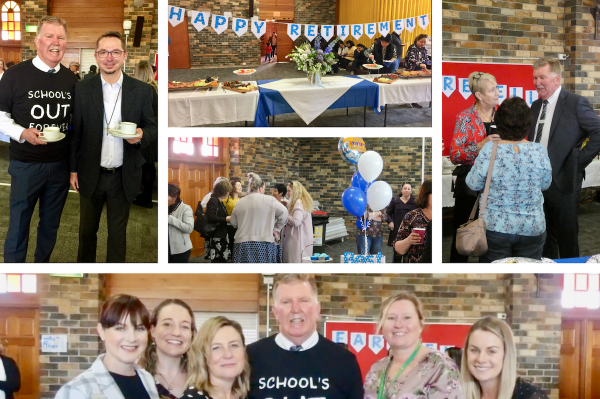 We wish Don every blessing for the years ahead and a well-deserved, fulfilling retirement with his wife, Geraldine, his family and friends.