Congratulations to St Justin’s, Oran Park student, Holly Burfitt, who has beaten out hundreds of young wordsmiths across the country to claim junior runner up in the Australian Catholics’  2018 Young Journalist Award competition.

More than 700 students entered this year’s competition, which asked students to go out and interview ‘voices of hope’ in their local area - people working to help others, reaching out to those on the margins, promoting social justice issues and creating a better future for everyone.

Holly wowed the judges with her 300-word piece on local hero, Wests Tigers Community Engagement Manager, Shaun Spence. It skilfully captured the essence of Shaun’s story as someone making a real difference to the people around him.

The Year 5 student’s choice of interviewee, mature vocabulary and sentence composition, as well as the personal insights offered in her piece, all undoubtedly contributed to catching the eye of the judging panel.

“Commentator, playing consultant and media personality are several of the roles that beckon retired rugby league players. Few however, will go on to fulfil roles that have a direct impact on their local communities. Shaun Spence is one of those rare individuals…” - Holly Burfitt's award-winning article

Holly said she entered the competition because the opportunity “appealed on several levels”.

“I could combine my love of creative writing and journalism with the opportunity to highlight the wonderful work of an inspirational person,” she said.

While the young Oran Park local said the Macarthur is full of many organisations and individuals who contribute to the community every day, Shaun stood out to her in particular.

“I wanted to show that sometimes the greatest sporting achievements take place off the field, and Shaun Spence is an individual with a heart-warming story of growth and success after personal struggle. It was affirming to see someone giving back to their community and helping those less fortunate” - Holy Burffit, junior runner-up, Young Journalist Awards 2018

The winners and runners-up in each award section - including Holly - enjoyed the privilege of having their article published in the Spring 2018 edition of Australian Catholics.

“I really enjoyed writing this article - from interviewing Shaun, to composing and writing it,” she said.

“When I found out that I had been judged runner-up, I was extremely excited. I felt quite honoured that my article was going to be published.”

Holly was presented with her award at a St Justin’s school assembly this term. 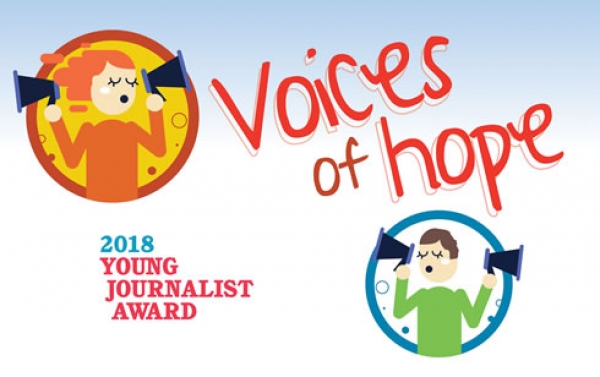 Australian Catholics  editor, Michael McVeigh, said he was impressed with the range of people chosen for the interviews and the efforts students made to write their articles in a journalistic style.

He and fellow judges, Eureka Street/Australian Catholics editorial consultant, Fr Andrew Hamilton SJ and Australian Catholics assistant editor, Michele Frankeni, acknowledged the appreciation shown for a range of members of the community who are inspirational in their efforts to give voice to charities, the marginalised and, importantly, to the ordinary work carried out by so many people for the betterment of society.

“Every student should be congratulated for the work they did,” Mr McVeigh said.

Holly encouraged all eligible students and aspiring young writers to give the competition a go next year.

As for herself, Holly is optimistic about penning more work in the years to come. The world is her oyster.

“I cannot wait to see where my love of writing and journalism takes me in the future.”