Saskia McIntyre and Emily Fenton recognised that there is too much packaging on food brought in from home by the students at their school and that by coming to school at least one day a week trash free with ‘nude food’, they could help beat plastic pollution and encourage their community to live more sustainably.

The students chose to address the issue in a unique way, creating a short ‘rap’ video to apply for a Nude Food Grant. Their rap invited St Columbkille’s students to make small changes to their practices - towards making a bigger change for the future!

"We’re part of the leadership team and we’re trying to help our teachers educate students about sustainability,” the girls said, “Most of Year 6 don’t come trash free, so we’re hoping to give each Year 6 student a lunch box so that they can set a better example for the younger classes."

It’s 2018 and we need a change
For future generations, we must sustain
Because did you know, our oceans are dying
And the number of plastic is multiplying.

Here’s another fact that you ‘wanna’ write down
Our sea levels are rising and we’re ‘gonna’ drown
So you better save the polar bears on the ice caps
Cos they’re slowly melting until they are flat.

Now this song’s almost over, only one thing left to say
There’s 26 million tonnes of plastic in our oceans
And it’s here to stay!

Together with one of their teachers, Paula Russo, Saskia and Emily arranged a Nude Food event for their school that included an assembly and a nude food picnic. The picnic encouraged students to pack a nude food lunch containing healthy foods, free from single use wrappers and packaging.

With Pope Francis encouraging all people to care for our common home in Laudato Si’, Saskia said their hope was that the picnic would help students to see that it’s fun and cool to have nude food. "We’re hoping to get the message across that by coming to school trash free, we’re all helping to reduce plastic waste that contributes to global warming."

To commence the assembly, Year 6 students - also known as the ‘Enviro Ninjas’ - showcased their nude food efforts. Saskia and Emily then shared their fantastic rap video, with no idea that Jacqueline Murray, Communications and Consumer Insights Manager for Nude Food, was present travelling all the way from Melbourne to award them with a grant.

Ms Murray said that she was excited to be with the school to launch their event. She explained that through the Nude Food Grant Program, Nude Food have pledged to giveaway $10,000 to help schools bring the best nutrition, environmental sustainability and Nude Food ideas to fruition. 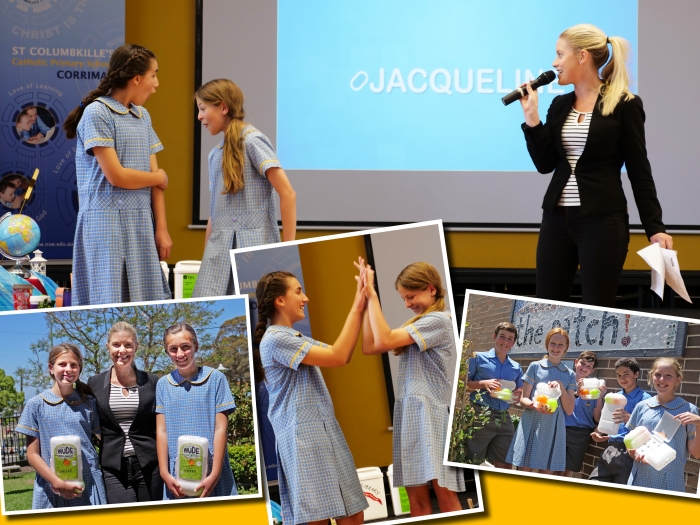 Saskia and Emily were awarded for their efforts with Nude Food rubbish free lunch boxes provided for every student in Year 6, valuing $900. Their entry came in the top five submissions of over 1000 across Australia.

Both Saskia and Emily were truly shocked by the announcement. Their excitement at winning was shared by their peers with loud cheers - especially from Year 6 who would individually receive lunch boxes - all due to the generosity of the girls.

St Columbkille’s teacher Paula Russo is one of the Wollongong Environment Network (WEN) contacts at the school, alongside Michelle Emmett (teacher), and co-ordinates environmental education and action at the school.

Emma McIntyre (Saskia’s mother) said the school does a fantastic job in providing things like the veggie garden. “These environmental initiatives set the groundwork from when the students are little. Mrs Russo does a great job of making these initiatives relevant to the students. She’s great at encouraging students to take action for the environment while having fun - the rap video is evidence of this.”

The school was rapt that WIN News and ABC Radio Illawarra stopped by to capture their event and share the good news with the wider Illawarra community.

Congratulations to St Columbkille’s, particularly to Saskia and Emily for making such a difference in their school community!