Congratulations to Holy Spirit College, Bellambi student, Mark Mancini, who has won an individual SILVER medal in Electrotechnology at the WorldSkills VETiS National Championships 2018 in Sydney over the weekend.

Mancini said he was proud to have competed in the largest and most prestigious skills and trade competition in the country. With over 500 competitors across many trades categories and approximately 21,000 people having attended the event, it was a fantastic opportunity for the Illawarra local to display his technical ability.

“I was excited for the competition and I was interested to see what it had to offer. I knew it would be hard, but I aimed high,” Mancini said.

Remaining cool, calm and collected over three intense days of competition, Mancini wasn’t daunted by the contest occurring on a national stage: “The scale of the competition did not phase me much because I’ve been competing in state and national levels of judo since the age of eight. I just treated it as any other normal day.” 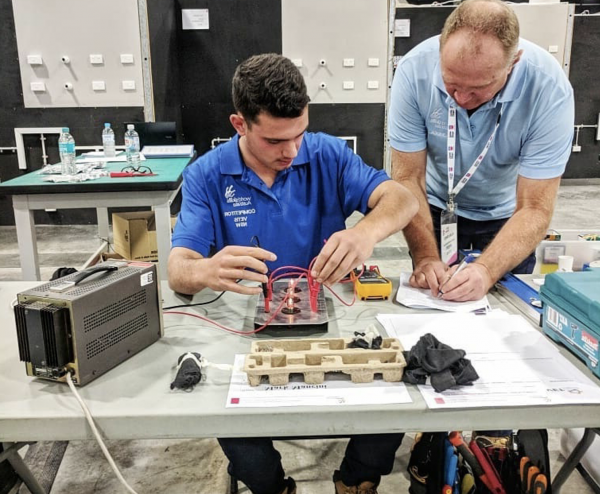 As part of the NSW VETiS Electrotechnology Team, Mancini battled it out with best young electrical students from each state, displaying great focus and skill to successfully complete six challenging tasks. This included five hours of wiring systems assembly; four hours on a workshop toolbox; three hours each on an electronics project, laboratory project and termination/jointing project; and another two hours on wiring preparation.

He and his competitors were assessed against precise criteria on their knowledge, practical competence and employability readiness. In a stellar effort that is a testament to his hard work, determination and learning at Holy Spirit, Mancini was awarded an individual second place.

“Receiving the silver is a big deal, it’s a great effort. I believe I demonstrated my best talents and abilities, and gained even more knowledge throughout the event,” Mancini said. 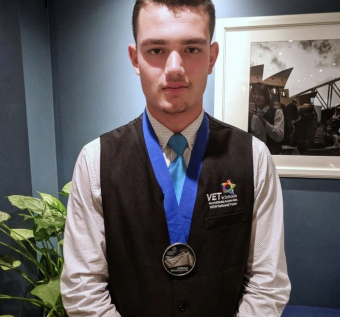 The experience also gave him a lot of respect for his competitors, many with whom he has now developed strong friendships.

“It was an excellent opportunity. To just watch young people like myself put their skills and crafts on show is something else. It’s amazing to see how experienced some of them are,” he said.

“I enjoyed every day, it was one of the best experiences I’ve had all year.”

The journey to the national competition has been almost 9 months in the making for Mancini, who began in October last year at the regional VETiS (Vocational Education Training in Schools) Electrotechnology Competition in Bankstown. Competitors from Holy Spirit achieved great results - particularly Mancini, who placed first and progressed from there.

“I’m so grateful for what Holy Spirit has offered me through having Electrotechnology and other VET subjects available. I would have never achieved this result without them,” he said.

“My advice to anyone else interested in competing: If you get the opportunity, go for it - do not hesitate. Aim high, as you have nothing to lose. It will most likely be one of the best experiences in your life.”

Mancini says he plans to use the electrotechnology expertise he has gained after he graduates from high school.

“The possibilities are endless!” he said, “I’m not one hundred per cent sure what career path I want to go down yet, but I’m tossing around a type of engineering or construction management.”

Congratulations to Mark Mancini and Holy Spirit College, Bellambi, on this great VET success on a national stage.


View all stories in VET News & Events. View All News and Events.