John Therry Rosemeadow student, Rhys Dewick, is one of the country’s most promising baseball prospects - and has an impressive list of team selections and awards to prove it. In a busy final year of secondary school, Dewick has stepped out onto the field as a NSWCCC, NSW All Schools and an Australian Schools representative, with his efforts culminating in a recent baseball tour of the US in front of the sport’s top scouts.

On returning to Australia, Dewick has been awarded CEDoW’s highest honour for a male student athlete - the Bishop Mascord Trophy for Most Outstanding Secondary Sportsman at the 2018 CDF Sports Awards.

“It felt great and humbling to receive the award,” Dewick said. “I wasn’t aware that I’d be the winner, so it took me by surprise. I’m really appreciative to be recognised.”

The 17 year old talent is the first John Therry student to make multiple CCC teams - both baseball and softball - and win both NSWCCC gold and NSW All School gold in baseball. He’s also the first student to win an Australian gold medal and be named as an Australian Schoolboy in a team event in the school’s history. 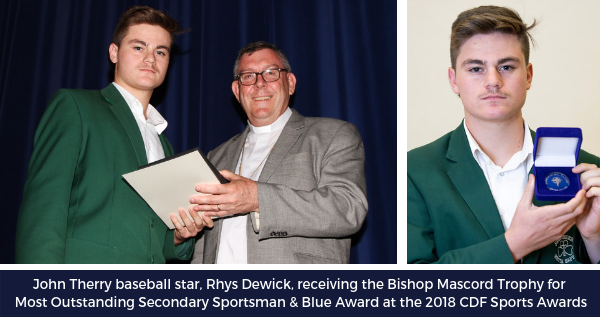 It was Dewick’s strong all-round performance for the NSW All Schools team at this year’s Australian Championships that saw him catch the eye of national baseball selectors. He placed in the top 5 for catching and 1st base fielding percentages, and was also one of the lead hitters for the NSW team.

This enabled him to achieve the pinnacle of school pathways sport - being selected in the Australian Schools team. Dewick said he thoroughly enjoyed playing in the team and touring the United States in front of the country’s top college and professional scouts.

“The trip overseas was amazing. It really showed me what college life will be like and the effort needed to be successful on the field and in the classroom. I made mates from around Australia, and America as well, and I’m really grateful to have had the opportunity to represent Australia,” he said.

Dewick has come a long way since first picking up a baseball at five years old for his local club, the Campbelltown Ghosts.

“There are plenty of opportunities to play baseball around [the Macarthur]. There are seven baseball clubs that make up the Macarthur Association and they’re always welcoming to new players, whether it’s for competitive or social play,” he said.

“I have a home field that’s a five minute walk down the road from where I live. My granddad was a baseball umpire and encouraged me to start playing. I was nine years old when I made my first representative team and I haven’t stopped since!”

John Therry Sports Coordinator, Jamie Cook, said the school is very proud of not only Dewick’s remarkable achievements in sport, but the way he has stayed humble and grounded throughout all his recent triumphs.

“Rhys has represented the school to the best of his ability across many sports. He always displays good sportsmanship and leadership skills. He also sets a great example for his peers, by attending all training sessions, wearing his school uniform correctly and with pride, and being accountable for all school work that is missed when he’s representing the school, Diocese, state and country” — Jamie Cook, Sports Coordinator, John Therry Rosemeadow

The Macarthur teenager was last year chosen to play as part of the Australian NXT GEN team at the Arizona Fall Classic baseball tournament — one of the USA’s most prestigious showcase events, that plays host to over 80 of the biggest college programs and some of the most influential pro scouts looking for new young talent. 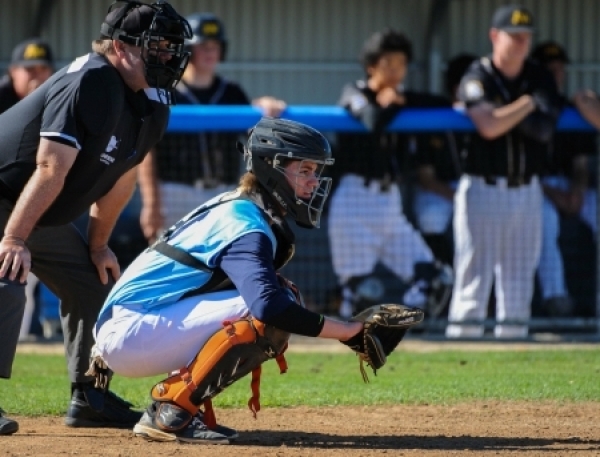 All these experiences, Dewick says, have assisted him in his endeavour to play professional baseball overseas. “My goal is to get into a quality baseball college next year, and achieve an extended education whilst playing baseball. After my college life, I’m hoping to sign professionally with a team and work my way through the ranks.”

His prospects are promising, if his recent momentum and string of success is anything to go by. Several US colleges have already approached Dewick expressing interest in having him attend and represent their school in 2019. Modestly, he credits his hard work and commitment to the sport as key to his talent with the bat and ball.

“I consider myself a hard worker. I’m not the fittest, or the quickest or the strongest, but I’ll always be up the top of my team in those areas because of my determination” — Rhys Dewick

“I train hard; I train with my team 2-3 times a week. We’ll train specifically for our positions then come together to work on situational plays, our fielding and hitting, and finish off with some conditioning. I train by myself another 2-3 times a week too, doing extra hitting sessions or gym work.”

“I’ve also been lucky enough to form relationships with a number of coaches who have a wealth of knowledge about the sport, and have gone above and beyond to help me become a better player and person. I’m very grateful for that” — Rhys Dewick

His advice to other young players is to stay positive and "just keep trying".

“Baseball is an unforgiving sport as you grow up. With batting, ‘Hall of Fame’ members only succeeded three out of 10 times. Baseball is all about how often you don’t fail. Always having a positive attitude helps immensely with performance, and focusing on having fun with your mates is the best part about it.”