Five students from the Diocese of Wollongong were recognised for their sporting achievements at the NSW Combined Catholic Colleges (CCC) 22nd Blue Awards on 11 February at St Mary’s Star of the Sea College, Wollongong.

The prestigious evening involves the presentation of awards and recognition of top student athletes across all sports from NSW Catholic secondary schools and colleges. This year saw over 50 students acknowledged for their achievements.

“Catholic schools have nurtured the careers of hundreds of professional Australian athletes, thanks largely to the dedication of volunteer teachers and the committed support from parents,” Mr Sparks said.

“The evening is a time to reflect on the fine achievements of our athletes and in doing so, acknowledge the wonderful structures we have in place for our students who choose a Catholic education.”

The two highest achieving boys and girls from each sport are judged by the NSWCCC Blues Committee, taking into account their 2018 achievements which often involves NSWCCC, NSW All Schools and Australian Schools representation.

The Blues Awards are the culmination of a busy year and a great advertisement for the sporting pathways available to students in Diocese of Wollongong schools.

Emma delivered a strong message, highlighting the importance of goal setting, working to overcome setbacks and the need to enjoy sporting experiences.

A former student of St John Vianney's, Fairy Meadow and Holy Spirit College, Bellambi, Emma was a regular Wollongong Diocese and NSWCCC representative and received a Blue Award in 2013, excelling in touch football and making it to the highest levels of school sport.

Emma made her debut for the Australian rugby side in the 2013-14 sevens World Series in Dubai. After this season she was selected in the ‘World Series Dream Team’ and was named 'Player of the Tournament' for the Atlanta leg - scoring ten tries!

Emma then reached the pinnacle of sport, chosen in the Olympic team for Rio and taking home a gold medal in the sport's debut year. 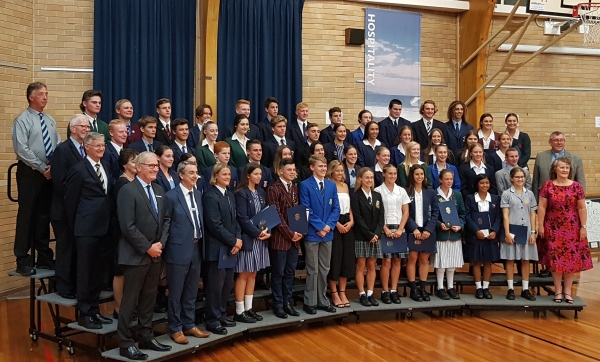 Mr Sparks said that the Blue Awards are a great advertisement of the sporting talent we have in our schools. “Congratulations to you all – you have excelled in your sport displaying positive attributes both during the sporting contest and as young adults at other times.

“Cherish this evening, it will prove to be a very important part of your sporting memories; and don’t forget to thank the people who have worked with you along your sporting journey, many of whom no doubt will be with you in the future.”

CEDoW acknowledges and thanks Dr Frank Pitt, Principal of St Mary’s Star of the Sea College, Wollongong and the St Mary's community for their hospitality and the use of their wonderful venue.